Joshua Pantalleresco is a writer, wanderer, columnist and dreamer. He publishes interviews at both his blog at http://michaelthroughtime.wordpress.com and http://www.comicmix.com.

He published his first book of poetry I Am... ten years ago and is now publishing his second, The Watcher right here at Smashwords. It is his first ebook.

He lives in Calgary.

When did you first start writing?
I first wrote for the Lawson Literary contest in London Ontario. In it, I came up with a character that traveled through time. I managed to take 3rd place in my school for the contest and it taught me that maybe, just maybe I could do more with this. I've been writing since.
What's the story behind your latest book?
I had intended to do another poetry collection. Initially, I was going to do one about the time I ended up working for James A. Owen for a short time. I was going to call this collection Independence Day. During the writing, I thought I would write a longer than expected poem or two to bridge the gap between then and now. However, as I kept writing and the story got bigger, I scrapped the idea of Independence Day and embraced the idea of The Watcher.

I was really pulled into this world. Growing up with reading books like Edgar Rice Burroughs' John Carter of Mars and Tarzan along with stuff like Stephen King's Dark Tower, I saw the influences clearly and just let myself go with it.

I supposed that's the long winded way of saying that it just happened and I was smart enough to go along for the ride.
Read more of this interview.

Where to find Joshua Pantalleresco online 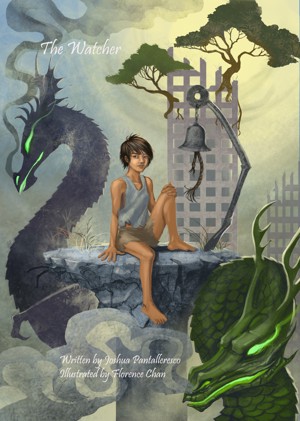 The Watcher by Joshua Pantalleresco
Price: Free! Words: 7,610. Language: English. Published: December 8, 2013. Categories: Poetry » Epic, Fiction » Fantasy » General
Is there more? The question is in the mind of a slave boy raised in a compound. He escapes his captors and explores a post apocalyptic world. Along the way, he finds that there is indeed more to life.

You have subscribed to alerts for Joshua Pantalleresco.

You have been added to Joshua Pantalleresco's favorite list.

You can also sign-up to receive email notifications whenever Joshua Pantalleresco releases a new book.