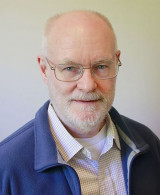 Growing up in a small town in rural Washington State, Jeff Stookey enjoyed writing stories. He studied literature, history, and cinema at Occidental College, and then got a BFA in Theater from Fort Wright College. In his 40s he retrained in the medical field and worked for years with pathologists, trauma surgeons, and emergency room reports.
Jeff lives in Portland, Oregon, with his longtime partner, Ken, and their unruly garden. Acquaintance is his first novel and Book 1 of Medicine for the Blues. Contact Jeff at medicinefortheblues.com.

What is your writing process?
I like to do a lot of research and then let things bubble up. When I first started on this project, Medicine for the Blues, I was still working and I’d get up at 3 or 4 in the morning and write for an hour every day. I’ve been told it’s good to write while you are still near the dream state. A friend told me that William Burroughs’s advice was never look at your emails until afternoon. That’s good. Also, I jot down notes, sometimes in the middle of the night or early in the morning, sometimes during the day, then string the notes together in the narrative. It’s quite amazing how much coincidence plays a part when you commit to a project. I hear this a lot. Things just sort of jump out in front of you. For example, while I was working on the character of Jimmy Harper, an older man gave a talk at the Hollywood Theatre about being an organist for the silent movies. That became part of my novel.
Do you remember the first story you ever read, and the impact it had on you?
When I was a child, my mother read to me from Winnie the Pooh. The stories about the Heffalumps and the Woozles sent me into gales of laughter. When I was in grade school I read a couple of Nancy Drew stories because my older sister was reading them. It was from reading those books that I realized I could put quotation marks on the page to make people talk and I became fascinated with writing stories in school. In junior high I encountered J. D. Salinger’s Nine Stories. That was magical. Subtle, funny, serious, heartbreaking. I was hooked and I wrote a number of short stories before I finished high school.
Read more of this interview.

Where to find Jeff Stookey online

Medicine for the Blues by Jeff Stookey
Medicine for the Blues explores the complexities of gender and sexuality through the historical lens of the early 1920s—a time of jazz, fascination with Freud, and the growing influence of the KKK. The trilogy tells a touching gay love story set against the dramatic backdrop of this influential era. Acquaintance Book 1 opens in Portland, Oregon, where a homosexual surgeon, Carl Holman, meets an ambitious young jazz piano player, Jimmy Harper, who is questioning his own sexuality, and they struggle with social conventions and widespread political repression. Chicago Blues Book 2 tells the story of Jimmy Harper’s adventures in Chicago where he descends into the jazz underworld and becomes entangled with a sinister mob boss and a black drag performer. Dangerous Medicine Book 3 follows Carl Holman’s struggles to navigate his medical career in the face of social and personal obstacles from the KKK, society, and other dangers. 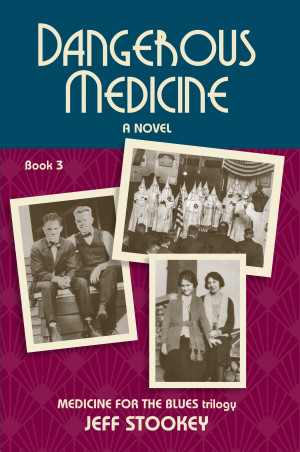 Dangerous Medicine follows Dr. Carl Holman’s struggles to navigate his medical career in the face of social and personal obstacles from the KKK, society, and other dangers. Dangerous Medicine is Book 3 of Medicine for the Blues, an LGBT historical novel trilogy based on extensive period research of the 1920s. 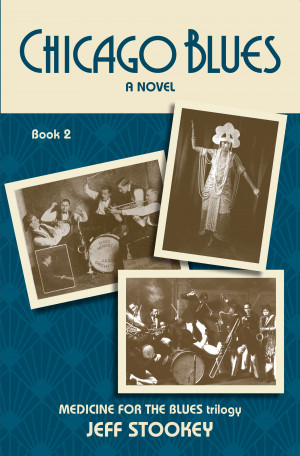 Chicago Blues tells the story of jazz piano player Jimmy Harper and his adventures in Chicago where he descends into the jazz underworld and becomes entangled with a sinister mob boss and with a Negro drag performer. Chicago Blues is Book 2 of Medicine for the Blues, an LGBT historical novel trilogy based on extensive period research of the 1920s. 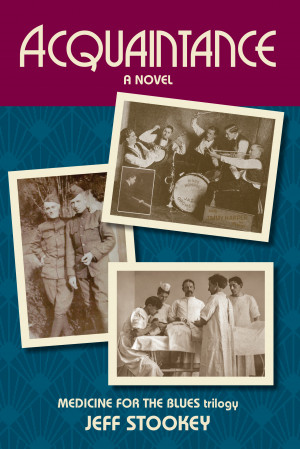 In 1920s Portland, Oregon, a homosexual surgeon—a veteran of WWI—meets an ambitious young jazz musician, who is questioning his own sexuality, and they struggle with social conventions and the Ku Klux Klan. This is Book 1 of the trilogy Medicine for the Blues, a work of LGBT historical fiction which explores the complexities of gender and sexuality through the lens of the early 20th century.

You have subscribed to alerts for Jeff Stookey.

You have been added to Jeff Stookey's favorite list.

You can also sign-up to receive email notifications whenever Jeff Stookey releases a new book.