John R. Freeman II was born in 1984 in Paris, Texas. Unlike many millennials (or whatever generation he’s in – it changes based upon the source), he has been continuously employed ever since he got his first job when he was 16. He completed a Bachelor’s Degree in History with a minor in English from Columbia College in 2013 while employed full time. Why did he wait so long to do that? Because unlike the rest of his generation he only got a degree when it became a prerequisite for advancement at his job. He saw how other people his age were sitting around under/unemployed with expensive and useless degrees and wanted no part of it, choosing to work instead.
He has many hobbies. His favorite is stargazing. He owns an Orion 10” Dobsonian telescope that he tries to use as much as possible. His favorite celestial objects are Jupiter, Saturn, and M13. Reading is probably his second favorite hobby. Others include video games (real ones, not the bullshit you play on your phone), writing (not academically – college cured him of that), and spending hours deep into the rabbit hole known as the internet, where he prefers to focus on libertarianism, the latest scientific research and news, and deepening his knowledge of history.
He is also single… ladies. He prefers to believe that his hobbies and interests have nothing to do with that.
You can keep up to date with his writing progress, random thoughts, and future projects at his new and currently very sparse blog: www.johnrfreemanblog.wordpress.com 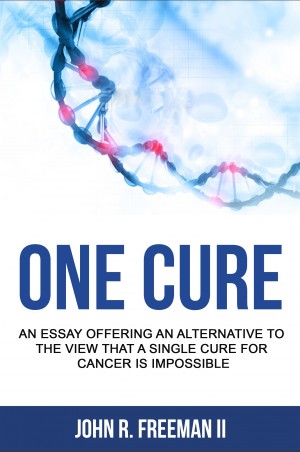 One Cure: An Essay Arguing Against the Idea that A Single Cure for Cancer is Impossible by John R. Freeman II
Price: $2.99 USD. Words: 18,590. Language: English. Published: August 29, 2015. Categories: Nonfiction » Health, wellbeing, & medicine » Cancer, Nonfiction » Science & Nature » Biotechnology
In this short work of speculative non-fiction, the author attempts to change the way that we view cancer, transforming it from an inevitable killer of all to a conquerable enemy.

You have subscribed to alerts for John R. Freeman II.

Would you like to favorite John R. Freeman II?

You have been added to John R. Freeman II's favorite list.