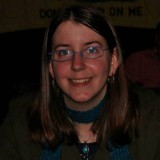 Julie Elise Landry grew up in New Orleans, Louisiana, and became something resembling an adult in Monroe, Louisiana. She wrote her first book in the fourth grade, stealing heavily from The Hobbit and Ella Enchanted, but learned not to steal when her mother grinned knowingly at the draft.

In 2013, she graduated from the University of Louisiana at Monroe with a Master of Arts in English focused in creative writing. Her life has been an amalgamation of children’s stories, musicals, and violent horror films since the eighth grade, when she watched The Ring by herself on Halloween night. (She does not suggest any thirteen-year-olds follow her example.)

Landry published the dark fantasy novel Bless the Skies in 2015.

She has also been published in The Sigma Tau Delta Rectangle, The News-Star, and Aftermath by Dan Snow.

You have subscribed to alerts for Julie Elise Landry.

You have been added to Julie Elise Landry's favorite list.

You can also sign-up to receive email notifications whenever Julie Elise Landry releases a new book.