Mary V Williams was born in a Hampshire village and spent most of her early childhood playing outside with mud, sticks and a dog, before being captured and made to go to school where she discovered books, poetry and art, which was a small consolation.
With an artistic, loving, but deaf mother, and a father who was an eccentric engineer and inventor, life was never dull. After school she devoured poetry and novels and began writing her own.

A nice safe job in a bank was proposed when she left school. Hating it, she found herself work with a charity caring for Polish and Tibetan refugees instead. Later, she studied at Manresa College in Roehampton, accompanied, she feels, by the ghost of Gerard Manley Hopkins who had been a Jesuit novitiate there, and met her husband, Peter. Together they made the most of Sixties London and traveled around Europe and North Africa before getting married and settling in Stoke Newington, a melting pot of radical political activity in those days. Mary continued to write poetry and teach but missed green spaces and the outdoor life.

After the birth of their two sons they decided reluctantly to seek quieter surroundings outside London and when Peter was offered a job in Lancashire the family moved Up North. Once the culture shock had worn off, the friendliness, scenery and the prospect of a larger house, made this a good move, despite the precipitation. She loved the humour and down to earth attitude of the people. She kept on writing and teaching.

As a family, they swapped houses with a Danish family, traveled by coach to Moscow and Estonia, camped on the Belgium coast, shared a house in Holland and had annual camping holidays with other families. The addition of another son soon after moving north and then a foster son three years later entailed a lot of cooking and mucking out of rooms. Odd socks and raids on the fridge were repeating motifs. Mary felt she needed a different career, and psychotherapy training and an MA in English led to a commission to write self-help books. Later she worked in child mental health, and for the NSPCC, until the war between Psychiatry and Psychology got in the way, then for seven happy years was a staff counsellor in a University.

Left with a huge, empty house once the children had left home, they sold up and moved south to Shropshire, where Peter had embarked on a career as an art therapist. Mary now had time and space to write. A series of books followed: The Poison Garden of Dorelia Jones, A Far Cry, Losing It, and recently The Marsh People (recently republished by Victorina Press). She won the Hippocrates Prize for poetry and the Ware Prize. Her poetry has been published in many journals and anthologies, and her published collected short stories, Unconfirmed Reports From Out There, is available as an e-book. She also founded the Drayton Writers’ Group.

She and her husband presently live in an old cottage and try to keep the garden at bay, though there’s a well under the living room floor and anything could be lurking in that. 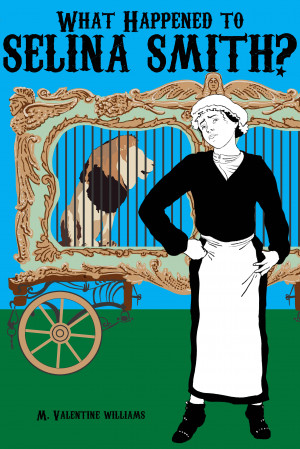 What Happened To Selina Smith by Mary Valentine Williams
Price: $4.95 USD. Words: 26,600. Language: English. Published: August 17, 2018. Categories: Fiction » Young adult or teen » Adventure, Fiction » Coming of age
In 1882, Selina Smith, 13, leaves school and is hired as a laundry maid. When her mother dies Selina leaves this work and becomes involved with Bostock and Wombwell’s Travelling Menagerie. She meets Python Woman, Marcus Orenzo and Wallace the lion, among others. Based on real events, the book follows the adventures of Selina Smith and her companions, and her search for work

You have subscribed to alerts for Mary Valentine Williams.

You have been added to Mary Valentine Williams's favorite list.

You can also sign-up to receive email notifications whenever Mary Valentine Williams releases a new book.