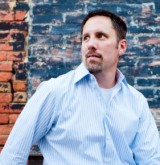 A veteran of the corporate wars, former journalist, and true studier of human and social behavior, John W. Mefford has been writing his debut novel since he first entered the work force twenty-five years ago, although he never put words on paper until late 2009.

John writes novels full of intrigue, suspense, and thrills, but they also evoke an emotional connection to the characters.

When he’s not writing, he chases three kids around, slaves away in the yard, reads, takes in as many sports as time allows, watches all sorts of movies, and continues to make mental notes of people and societies across the land.

You have subscribed to alerts for John W. Mefford.

You have been added to John W. Mefford's favorite list.

You can also sign-up to receive email notifications whenever John W. Mefford releases a new book.