Robin Knight reported around the world for American newsmagazines and corporate publications for 40 years. He began covering international events in 1968 when he joined US News & World Report and soon after found himself in Northern Ireland as the civil rights movement began. Over the next 28 years, working for this prestigious American weekly publication, he reported from 50 countries in Europe, the Mideast and Africa. Later he wrote for Time magazine in various capacities including as a special contributor and a book reviewer.

Joining BP plc in 1997 as Editorial Writer he contributed to The BP Magazine and other BP publications covering the company’s activities from China to Colombia, the US, Iran, Azerbaijan and Trinidad until 2003. Since then he has written for many outlets in the UK and around the world and run his own company Knightwrite Ltd. www.knightwrite.co.uk

At various times Robin Knight has been based in London, Moscow, Johannesburg, Rome and Washington DC. In the course of his career he interviewed numerous heads of state, covered wars in Rhodesia, Namibia, the Mideast and the Balkans and was on the scene at key moments during the collapse of communism in Eastern Europe and Russia. Many of his articles and columns have been syndicated in the US and elsewhere and he has won several international awards for his reporting.

A Road Less Travelled is a compelling record of an adventurous, varied and privileged life from early days on the Isle of Wight in the post-war world, to university education in Ireland and the US and on to an enviable career as a globe-trotting foreign correspondent for a weekly news magazine that would be difficult to emulate today.

A review of the memoir may be read on
http://www.oldpangbournian.co.uk/Community/Publications.aspx

...and a fascinating commentary on newsmagazines and the book by John Marks at
http://john.purplestateofmind.com/?p=3145

ROBIN KNIGHT was born in 1943 and educated at Trinity College, Dublin, and Stanford University, California, where he gained an MA in Political Science in 1968. His awards include an Overseas Press Club citation in the United States and a Business Journalist of the Year Award in the City of London. He has been chairman of the Foreign Correspondents’ Association of Southern Africa and a member of the committee of the Foreign Press Association in London.

He is an honorary life member of the Association of American Correspondents in London, a Life Member of the Marylebone Cricket Club, a member of The Pilgrims and a former Governor of Pangbourne College. He lives in London and in 2014 published a 6,000 word monograph about a British World War 11 Special Operations Executive officer "In Search of Mike Cumberlege" .

Since then he has had two well-received books published in 2016 in the UK - "Pangbourne College: Spirit in Changing Times" which is an illustrated history of one of Britain's most distinctive private schools for its 2016-17 centenary; and "The Old Pangbournian Record" which is an edited compilation of 1,250 obituaries and death notices of Old Pangbournians 1917-2016.

Why should I buy your book?
I think, I hope, that it tells you a great deal about three things of interest to a contemporary reader - the evolution of journalism since about 1970; world affairs since 1970 with special emphasis on the collapse of communism and the end of apartheid; and life inside a large international oil company over the past 15 years.
Is this your first book?
No, there have been several others, not all published. One was on life in Saudi Arabia and another was on the construction of the Baku-Tbilisi-Ceyhan oil pipeline. I'm currently at work on a school history to be published in 2016 in connection with its centenary. Down the line I plan a biography of my formidable great aunt Florence who had an extraordinary life from 1880-1974 all over the world.
Read more of this interview.

Where to find Robin Knight online 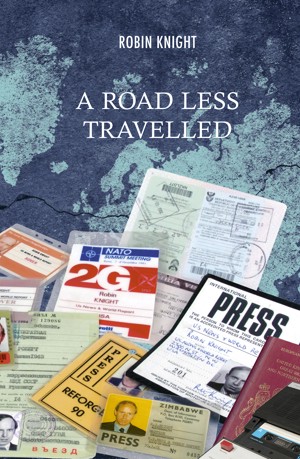 Robin Knight reported around the world for American newsmagazines and corporate publications for 40 years. He began covering international events in 1968 when he joined US News & World Report and soon after found himself in Northern Ireland as the civil rights movement began. Over the next 28 years, working for this prestigious American weekly publication, he reported from 50 countries in Europe.

You have subscribed to alerts for Robin Knight.

You have been added to Robin Knight's favorite list.

You can also sign-up to receive email notifications whenever Robin Knight releases a new book.