Now she's turned her writing hand to a mystery series with a no-nonsense detective and paranormal elements.

All good mysteries are grounded in social behavior. Kate began her apprenticeship of human idiosyncrasies with tributes to eighteenth and nineteenth century classics: "A Man of Few Words" (based on "Pride & Prejudice"), "Persuadable" ("Persuasion"), and "Mr. B Speaks!" (Samuel Richardson's "Pamela").

Next came the Victorian fantasy series, The Roesia Chronicles, so far including "Aubrey: Remnants of Transformation," "Richard: The Ethics of Affection," "Lord Simon: The Dispossession of Hannah," and her most recent publication, "Tales of the Quest."

Where to find Katherine Woodbury online

Donna Howard Mysteries by Katherine Woodbury
The Donna Howard Mystery series connects the past with everyday modern life. Like many amateur detectives, Donna Howard didn't set out to be one. She also never wanted the supernatural ability to literally see historical figures strolling through her hometown of Portland, Maine. She only wanted to be a hairdresser, a good sister, and a decent girlfriend—until an ancient Roman coin embroiled her in a contemporary mystery. Tackling crimes that no one else can solve, Donna travels around the Northeastern United States, and to time periods as disparate as Ancient Rome and Tudor England.

Roesia by Katherine Woodbury
In this world, some countries have knights, and some have dragons. Roesia has bureaucrats, social climbers, and magic. Bounded by the sea on one side, superpowers and (supposedly) less advanced countries on the other, Roesia struggles to progress politically and scientifically. Moral improvement is left to each individual's own devices. Aristocrats, ministers, police, criminals, and the rising middle-class tread their own (and occasionally treacherous) paths to new identities, romantic relationships, and redemption. 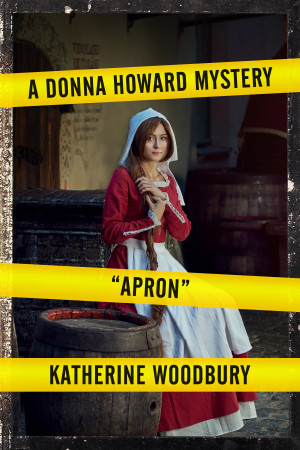 Apron by Katherine Woodbury
Price: $2.99 USD. Words: 49,480. Language: English. Published: December 15, 2019 by Peaks Island Press. Categories: Fiction » Mystery & detective » Women Sleuths, Fiction » Fantasy » Paranormal
Donna Howard researches the provenance of art and antiques, making the most of her unique ability to speak to remnants of the dead. This time, Donna's investigation into a colonial-era portrait from upstate New York unexpectedly delves into the dark history of her adopted niece, SarahAnn, bringing to light a possible kidnapping and a murderer who got away scot-free. 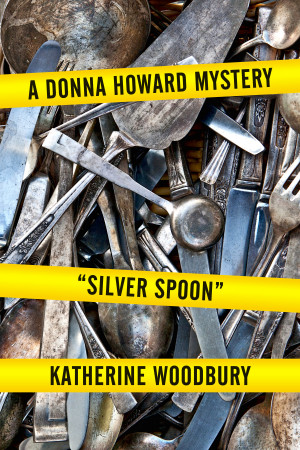 Silver Spoon by Katherine Woodbury
Series: Donna Howard Mysteries. Price: $2.99 USD. Words: 59,070. Language: English. Published: March 7, 2019 by Peaks Island Press. Categories: Fiction » Mystery & detective » Women Sleuths, Fiction » Fantasy » Paranormal
Donna Howard investigates the provenance of antiques, with the help of deceased historical people only she can see. The setting is the infamous Salem, Massachusetts, and the item in question a haunted silver spoon. Its past owners point Donna to a stash of antiques in an old man's basement, an old man who died in an accident Donna suspects was less than "accidental." 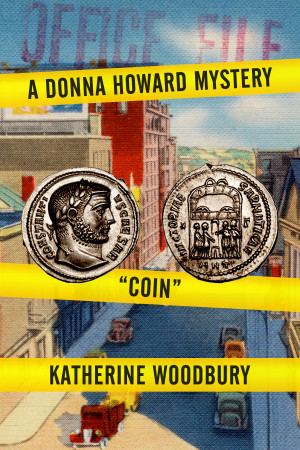 Coin by Katherine Woodbury
Series: Donna Howard Mysteries. Price: $2.99 USD. Words: 55,880. Language: English. Published: February 21, 2018 by Peaks Island Press. Categories: Fiction » Mystery & detective » Women Sleuths, Fiction » Fantasy » Paranormal
Donna Howard debuts in a new mystery series about what makes people tick, in the past and in the present. In her day-to-day life, Donna is as ordinary as they come, except for her extraordinary ability to see history, to interact with ancient, colonial, and Victorian-age people. When a possible murder occurs close to home, "then" and "now" collide in ways she can no longer ignore. 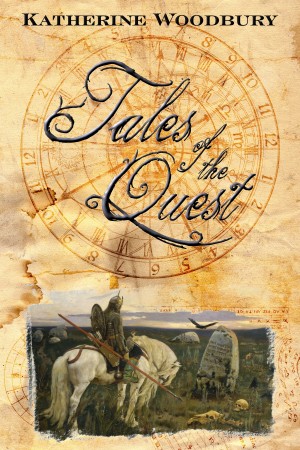 Tales of the Quest by Katherine Woodbury
Series: Roesia. Price: $2.99 USD. Words: 39,500. Language: English. Published: September 23, 2016 by Peaks Island Press. Categories: Fiction » Fantasy » Historical, Fiction » Romance » Paranormal
Ah, the Quest! The sight of noble knights setting forth on heroic tasks to win the hand of the fair princess stirs any heart. This fourth installment in the Roesia Chronicles explores the dark and violent beginnings of the Quest, up to its pragmatic and often humorous present. Amidst all the politics and game playing, can true love still triumph? Therein lies quite the tale. 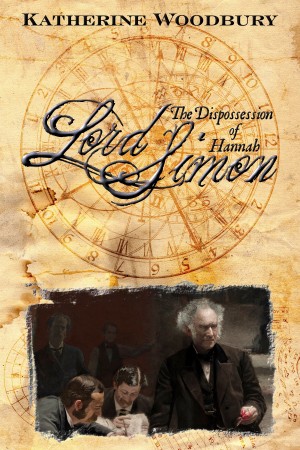 Lord Simon: The Dispossession of Hannah by Katherine Woodbury
Series: Roesia. Price: $2.99 USD. Words: 41,110. Language: English. Published: August 3, 2015 by Peaks Island Press. Categories: Fiction » Fantasy » Historical, Fiction » Romance » Paranormal
To save a woman under assault, Lord Simon bespelled her into the walls of his house, powerful magic he discovers he cannot undo. Driven to free her from a prison of wood and stone, he consorts with the dregs of society, and bargains with the high and mighty. As his reputation and his house crumble around him, his obsession to save a woman long thought dead may yet drive him mad. 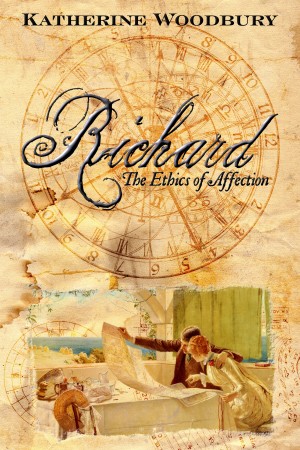 Richard: The Ethics of Affection by Katherine Woodbury
Series: Roesia, Book 2. Price: $0.99 USD. Words: 18,600. Language: English. Published: October 29, 2014 by Peaks Island Press. Categories: Fiction » Romance » Paranormal, Fiction » Fantasy » Historical
Richard St. Clair struggles daily to suppress his less-than-appropriate feelings for his new assistant. He's an engaged man, after all. And he thinks he's got it all under control. Until an unknown adversary slips him a love potion that unleashes his true affections. Now he must scour the city for the identity of his foe and find a way to ethically express the desires of his heart. 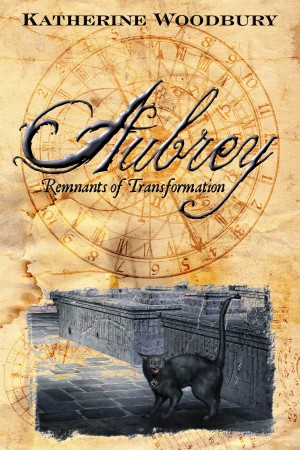 Aubrey: Remnants of Transformation by Katherine Woodbury
Series: Roesia, Book 1. Price: $2.99 USD. Words: 42,040. Language: English. Published: April 18, 2014 by Peaks Island Press. Categories: Fiction » Fantasy » Historical, Fiction » Romance » Paranormal
Aubrey awakens to discover she's barely survived a miscalculated enchantment that turned her into a cat. Kidnapped by unprincipled magicians and exploited by ruthless politicians, she must rely on her own wits and the helping hand of a cool-headed police officer. But his own interest in her may be as personal as it is professional. When magic goes wrong, the complications only multiply. 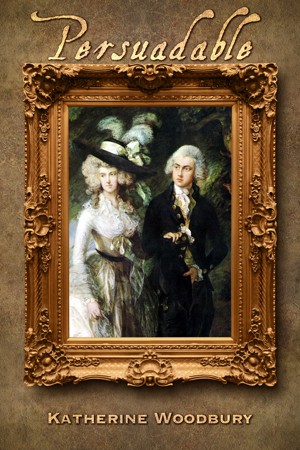 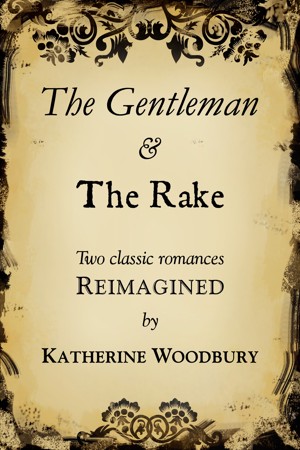 The Gentleman and the Rake by Katherine Woodbury
Price: $2.99 USD. Words: 63,780. Language: English. Published: September 5, 2012 by Peaks Island Press. Categories: Fiction » Romance » Regency, Nonfiction » Literary criticism » Gothic & Romance
An unconventional look at two landmark works of English literature. First, a lighthearted take on the critical events in Jane Austen's "Pride and Prejudice" from the perspective of Fitzwilliam Darcy. Then Mr. B, the redeemed rake of Samuel Richardson's scandalous "Pamela," is summoned to court to tell his version of the story. A lively romp through the roots of the modern romance novel! 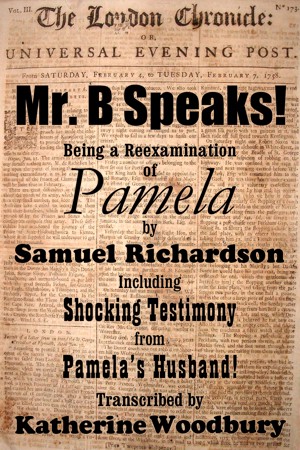 Mr. B Speaks! by Katherine Woodbury
Price: $0.99 USD. Words: 35,800. Language: English. Published: June 3, 2011 by Peaks Island Press. Categories: Fiction » Romance » Historical, Fiction » Themes & motifs » Legal
In a world where characters from novels can be tried in real courts for their literary crimes, Mr. B, the famously redeemed rake of "Pamela" (the English language's first true romance novel), must defend himself before a panel of skeptical literary scholars. Can he redeem his good name and win back his wife? 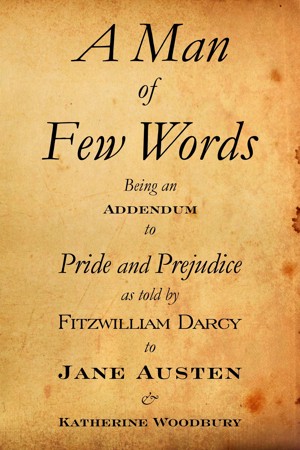 A lighthearted look at the critical events in Jane Austen's famous novel from the perspective of Fitzwilliam Darcy.

You have subscribed to alerts for Katherine Woodbury.

You have been added to Katherine Woodbury's favorite list.

You can also sign-up to receive email notifications whenever Katherine Woodbury releases a new book.