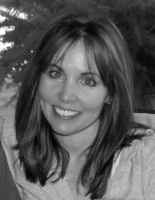 Kathy Hatfield is the co-author, with her mother Julie Mannix von Zerneck, of Secret Storms: A Mother and Daughter, Lost then Found. This story of two strangers, a mother and daughter separated at birth, and the riveting journey each took to redeem the past, was the winner of the National Indie Excellence Book Award and the IndieReader Discovery Award. Featured in Redbook Magazine, on the Oprah Winfrey Network, on The Katie Show with Katie Couric and The Jeff Probst Show, Secret Storms was called “compulsive reading” by Publisher’s Weekly. Kirkus Reviews wrote: “In this heartwarming dual autobiography, actress Mannix and her daughter, Kathy Hatfield, recount the saga behind a separation of more than 40 years… Shining through both narratives is goodness and the power of the human spirit.”

Kathy Hatfield was born in Philadelphia, Pennsylvania and grew up surrounded by two brothers, twenty-five cousins, and two sets of grandparents in Indialantic, Florida. She attended Florida Atlantic University, after which she worked as a mortgage broker while running her own small business selling men's neckties. She now teaches World Literature at a high school in Florida where she serves as English department chairman. She and her husband of 25 years live in a quaint beachside community with their two daughters. She is a freelance writer and moderator of the Adoption Reunion Stories Facebook page, which currently has over 2,800 members. She's a competitive runner and participates in 5k races when she's not correcting papers.

She is currently at work on a book about adoption reunions and how to successfully navigate them.

Where to find Kathy Hatfield online 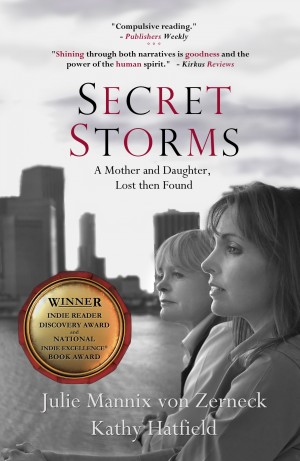 Secret Storms: A Mother and Daughter, Lost then Found by Julie Mannix von Zerneck & Kathy Hatfield
Price: $3.99 USD. Words: 69,310. Language: English. Published: May 2, 2016. Categories: Nonfiction » Biography » Autobiographies & Memoirs, Nonfiction » Biography » Woman biographies
The year is 1964. A pregnant, nineteen-year-old debutante is confined to a mental hospital until she gives birth. A loving middle-class couple adopts the baby girl from Catholic Charities. In this award-winning memoir, a mother and daughter recount the stories of their lives. Written in two distinct and deeply expressive voices, their stories seamlessly meld together toward a breathtaking ending.

You have subscribed to alerts for Kathy Hatfield.

You have been added to Kathy Hatfield's favorite list.

You can also sign-up to receive email notifications whenever Kathy Hatfield releases a new book.