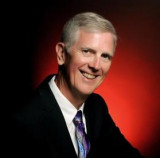 Ken Brown is an application web developer by day and author by night.

Over the years he has written short stories for his own enjoyment and started a couple of other books, but never had the fortitude to finish the books. Ken found himself distracted by work, family and other business ideas that he thought were more important than writing.

But one day an idea came to him about a boy who wants to rescue a girl and finds that going through a cave he is transported to another planet. A planet where magic is real and the dangers of wild animals, strange people and bizarre customs are just as real.

The book was inspired by a photograph Ken found on the Glacier National Park's website. A simple photograph of the photographer standing in a tunnel in winter in Glacier National Park, Montana. The image showed icicles hanging from the tunnel exit with large boulders hugging the wall behind. Looking at the boulders and rocks, Ken saw images of people, horses and a story developed of a boy searching out the Mountain King.

A dream started to turn this fanciful world into a book and it led three years later to Ken's first published novel Eclipse of the Triple Moons.

Do you remember the first story you ever wrote?
If I go back to a little kid under ten years of age, I wrote a horror story. It was a horror story to a ten year old, anyway. It was two pages handwritten. My target audience, my Mother, who enjoyed it immensely if I remember. The only thing I remember about the story is it was based in a graveyard.
What is your writing process?
It has changed over the years. The first full novel I completed, Eclipse of the Triple Moons, the process involved seeing a photograph from inside a tunnel taken at Glacier National Park. When I looked at the stones along the wall outside the tunnel, I could make out faces. I decided on creating a fantasy story about a boy searching for the mountain king. But, that was just a germ of an idea. I then researched people, customs, cultures, and how to write a novel. Then I placed in my mind the three act structure and outlined the beginning few chapters and how I envisioned the ending. From there I would write a few chapters and then outline the next six to ten chapters and write them to come to an exciting climax nine months later.

The second book I outlined immediately after finishing book one. But, since I made major re-work on book one, I had to go back and re-outline book two before beginning to write.
Read more of this interview.

Where to find Kenneth Brown online 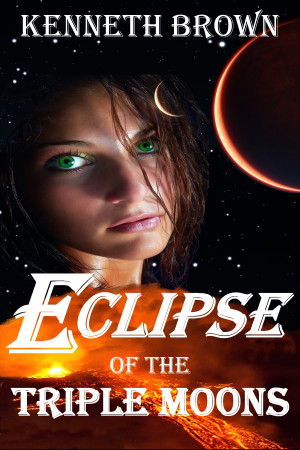 Eclipse of the Triple Moons by Kenneth Brown
Price: $0.99 USD. Words: 94,800. Language: English. Published: June 2, 2018. Categories: Fiction » Fantasy » Epic, Fiction » Science fiction » Adventure
This sci-fi, action-adventure fantasy will lead you to the world of Aloheno, a world with three moons, magic, powerful staff, strange beasts, a volcano sacrifice and strange customs. The solar eclipse of the triple moons is coming and Erik Anderson must rescue his friend before the last eclipse or the evil king will sacrifice her to the volcano god, Velidred, gaining magic too powerful to defeat.

You have subscribed to alerts for Kenneth Brown.

You have been added to Kenneth Brown's favorite list.

You can also sign-up to receive email notifications whenever Kenneth Brown releases a new book.