Kim was born in Pacific Northwest in 1951. When he was about 15 years old his family moved out into the mountains north of his hometown.

He still resides in the Pacific NW with his wife and son.

His hobbies are woodworking, fishing and watching football and baseball.

Kim's favorite pastime is spending time with his wife and son.

His dogs, two female boxers, bring him much joy and entertainment. He's a big-time animal lover and claims that his dogs taught him how to love.

He also has a strong interest in inventing, patenting and marketing his products. He declares that his imagination and out of the box type thinking brings these ideas to him. Kim's not one to sit around on an idea but puts it in action and his products now or marketed throughout the United States and Canada.

At this stage of his life he has turned his attention and to authoring and publishing books on his past experiences and interests. He loves and gets high satisfaction on successfully developing one of his inventions or books as they reveal his creative side.

Do you remember the first memory you had?
My first memory was at three years old as I was having 105 sutures to close a massive wound across my face. A train, on the side I happened to be sitting, hit the car I was riding in. The head on collision with the locomotive, in a matter of a second, turned me from a beautiful three-year-old blond boy to scarred and ugly child.
Where and how did you grow up?
I was raised in the Pacific Northwest. I had a very dysfunctional life as a child. Living in poverty and child abuse created a terrible climate for raising a child. My mother was handicapped and in very poor health. This left us children at the mercy of our father who hated his situation.

This escalated to the point of near destruction, as I got older. The senseless physical abuse and mental torture I endured from my father was unmerciful. As a child I was a bed wetter until I was somewhere near 10 years old. This added much stress to the already dysfunctional life I lead. I felt that, here again, I was not normal and a freak or misfit. The beatings and agony from my father went on for several years. My father had a much different approach on my bed-wetting. He figured that I was just too lazy to get out of bed to go to the bathroom. He reasoned that I would much rather lie in the bed and urinate all over myself. So his diagnosis and plan was that he would beat it out of me. This punishment did not work, and if anything escalated the problem. My father decided to ratchet up the beatings. He then took the approach that not only would he beat me, but would drape the soggy urine soaked blanket over my head, while he beat me with the belt. There would be times where I would have to stand there for 30 minutes or more breathing in the urine soaked blankets that had a stench of ammonia. These moments seemed to last an eternity. I developed into a hardened boy that desperately needed sociological help and mental health counseling, I received none. My life continued to spiral into a deep dark hole.

I went on to being homeless, living in a tent pitched in the forest and living off the land. My living room at 16 years old was a campfire and folding chair.
Read more of this interview.

Where to find Kim Hemphill online 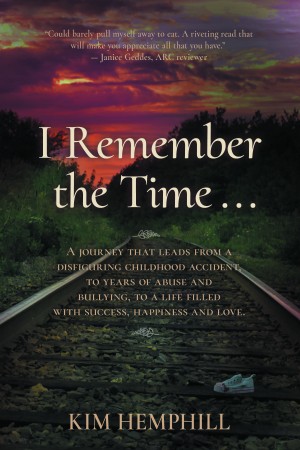 I Remember the Time... by Kim Hemphill
Price: $9.99 USD. Words: 66,650. Language: English. Published: December 15, 2016. Categories: Nonfiction » Biography » Personal memoir, Nonfiction » Inspiration » Personal inspiration
Ride along on a journey that starts from a disfiguring childhood accident to years of abuse and bullying, and ends with a life full of success, happiness, and love.

You have subscribed to alerts for Kim Hemphill.

You have been added to Kim Hemphill's favorite list.

You can also sign-up to receive email notifications whenever Kim Hemphill releases a new book.