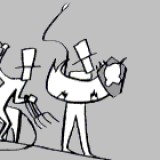 History knows Preston Treacher Knoist as the last Knoist Brother. The Knoists hunted for themselves the first rabbit they learned to make vanish. The lame Knoists chased it. The blind ones caught it. A naked one put it in his pocket. After delighting audiences to sold-out shows for over a generation, the Knoist Brothers Circus folded in the final days of the American Civil War. The other two Knoists, the strong man, and a plumber were killed by Hermes, The World's Mightiest Snail. Survivors did not ask for their money back.

In 1913, Preston T. Knoist was found clenched to an inactive boiler of the abandoned Chicago Liberty Paints factory, penniless and dead. With him were what may perhaps be described best, from stitched silken scraps, as a collapsed unfinished Brobdingnagian bladder, and a journal and sketchbook archive of over forty-five thousand pages. Many scientific and cultural movements that lived and died in the 20th Century were named with words and phrases coined from the fevered scribblings Knoist left behind, such as pasteurization, communism, and a half-burned curse to compel its victims to cut footloose.

You have subscribed to Smashwords Alerts new release notifications for Preston T. Knoist.

You have been added to Preston T. Knoist's favorite list.

You can also sign-up to receive email notifications whenever Preston T. Knoist releases a new book.