Russell is a native of Mena, Arkansas, and he is a 1992 graduate of Mena High School. During his time at Mena High School, Russ earned 10 athletic letters in 3 sports (football, basketball, and baseball) including 2-time All-District honors in football and All-District honors in baseball. He received a B.A. in Physics (summa cum laude) from Hendrix College (Conway, AR) while lettering 3 times for the Hendrix Warrior varsity baseball team. He earned an M.S. in Health Physics and a Ph.D. in Nuclear Engineering from Texas A&M University. He is currently a Principal R&D Scientist/Engineer in the Applied Nuclear Technologies organization at Sandia National Laboratories located in Albuquerque, New Mexico. He serves as Principal Investigator for the Neutron Gamma Energy Transport (NuGET) Advanced Simulation & Computing software project.

Russ is a voting member of four ASTM International Committees (C26, E10 , E54, and E61) while serving as the Secretary of E10 (Nuclear Technology & Applications). He serves as the U.S. Program Chair for the 16th International Symposium on Reactor Dosimetry. Russ is also Assistant Director of the microEP Graduate Program at the University of Arkansas. He has authored or co-authored ~25 scientific publications or technical reports in the last 20 years.

Russ telecommutes to Sandia National Laboratories from Fayetteville, Arkansas where he lives with his wife and two daughters. He enjoys reading, discussing sports and statistics, and complaining about both the Fightin’ Texas Aggie football team and the state of science literacy in the country. You can find out about all these things and more on his Minimum Publishable Unit (MPU) blog (http://depriest-mpu.blogspot.com/). 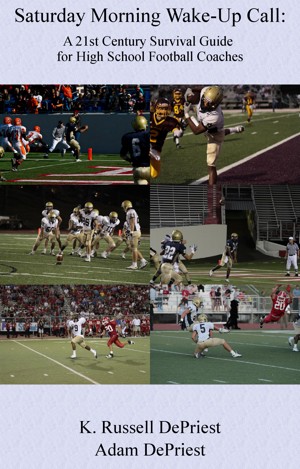 The conclusions drawn by analyzing statistics from college and professional football often do not translate to the high school game because the games are so different. This book puts those powerful statistical techniques for maximizing a team's chance of winning into the hands of high school coaches and fans. These techniques are illustrated using the Pulaski Academy Bruins as a case study.

You have subscribed to alerts for K. Russell DePriest.

You have been added to K. Russell DePriest's favorite list.

You can also sign-up to receive email notifications whenever K. Russell DePriest releases a new book.