When Laureen returned back from her one-year journey around the world, she joined AmeriCorps and worked as the volunteer coordinator for the Arts Council for Monterey County. She used the earned stipend in Cambodia, where she resided on a Buddhist Pagoda with Buddhist Monks and Nuns.

She became a feature writer for the Salinas Californian newspaper. One of those stories, “Sisters give birth two minutes apart”, was picked up and published by, USA Today, and the Disney blog, www.babble.com.

Where to find Laureen Diephof online 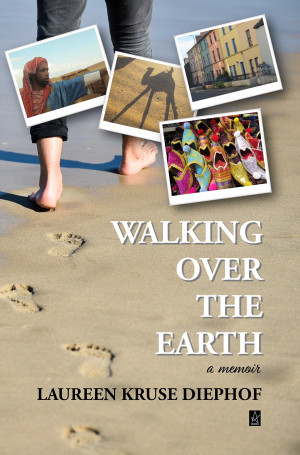 Walking Over the Earth by Laureen Diephof
Price: $9.77 USD. Words: 178,850. Language: English. Published: February 13, 2020 by Adelaide Books Publishers. Categories: Nonfiction » Biography » Personal memoir, Nonfiction » Biography » Adventurers & explorers
"Here’s a woman, age 75, traveling alone without a cell phone, with only two bags, a computer, on a budget, and who stays in homes of people she doesn’t know, who goes whichever way the wind happens to be blowing, and she’s sitting right here in front of us."

You have subscribed to alerts for Laureen Diephof.

You have been added to Laureen Diephof's favorite list.

You can also sign-up to receive email notifications whenever Laureen Diephof releases a new book.