Historical Fiction and Psychological Thrillers continue to be his passion and he pursues it further with, Hemingway&#39;s Suitcase. Project 7 Alpha, his first novel, was published in 2008, followed by Vengeance at Midway and Guadalcanal, End Game in the Pacific, and his latest novel set in WWII, Code Name Infamy.

A rare author that has actually lived the passion he writes about; Leland is a retired Naval Aviator and continues to fly as an International Captain with American Airlines and is still active as a Test Pilot. He also flies for fun in his war-bird, a Nanchang CJ-6A.

Leland received his Masters from Embry Riddle Aeronautical University and also graduated from the Naval War College. Studying and writing about historical battles laid the foundation for his novels.

He flew 16 different naval aircraft in 10 squadrons; including the F-4 Phantom II, EA-6B Prowler and TA-4J Skyhawk. Attached to CAG (Air Wing) 5, 11 and 1 He cruised on the USS Midway, America and Lincoln. Leland flew 80 missions over the war torn skies of Bosnia, Somalia, and Iraq. An Airline Transport Pilot and Certified Flight Instructor; he has flown numerous civilian types from the Cessna 150 to the Boeing 777-300. Currently he is rated in B777, B767, B757, B737, B727, MD-80 and Sabreliner series aircraft.

Leland got into the flight test world in 1995 when he transferred to VX-30, Naval Weapons Test Center Point Mugu. He flew as a Project Officer on various test programs and was the Squadron Operations Officer. Leland also attended the Project Officer/Engineers and the Out of Control Flight (spin school) courses at National Test Pilot School. In 1998 he was inducted as a Full Member in the Society of Experimental Test Pilots (SETP).

Closing out his Naval Aviation career in 1998 with 600 carrier landings (200 night) on 11 different carriers; Leland, Laura and their 4 kids moved back to St. Louis. Once settled in at American Airlines, he also concentrated on his writing.

Leland was born and raised in St. Louis Missouri. He attended Chaminade College Prep Class of 1977. After High School he joined Naval ROTC at the University of Missouri, Columbia. Upon graduation in December of 1981, he was commissioned an Ensign in the United States Navy. A month later he married Laura L Cantrell and they set out on their Navy adventure together.

Where to find Leland Shanle online 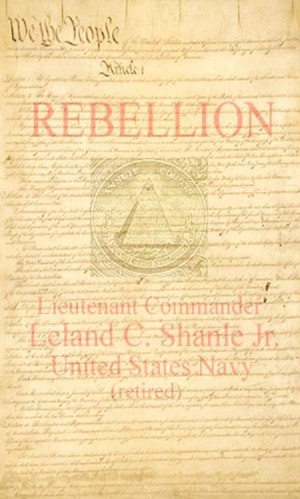 REBELLION; a Common Sense Application to America by Leland Shanle
Price: $0.99 USD. Words: 23,040. Language: English. Published: May 15, 2011. Categories: Nonfiction » Politics & Current Affairs » US Constitution
The United States of America is in deep trouble; the two party system that our founding fathers warned against is destroying the country. The answer as always lies within the Greatest Experiment, the Constitution of the United States of America. Solutions presented simply and to the point by a former fighter pilot.

You have subscribed to alerts for Leland Shanle.

You have been added to Leland Shanle's favorite list.

You can also sign-up to receive email notifications whenever Leland Shanle releases a new book.