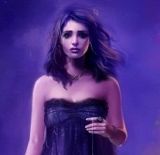 Lili Lost in a Book

About me...well, I live in WA, I've got 3 younger brothers (2 of which are twins), I graduated from high school spring of 2010 and got my AA degree spring of 2011, I'm still going to school though (I'm hoping to get into nursing), and I am also hoping to become a published author someday.

Meanwile, I am a book blogger, so if you would like me to check out a book of yours, let me know! Just check out my blog first for submission guidelines (http://lili-lost-in-a-book.blogspot.com/p/contact-me.html)

I very rarely watch TV, but when I do I like to watch America's Next Top Model, Ghost Hunters, Ghost Whisperer, Pretty Little Liars, and I just recently started watching Charmed. Yes, re-runs, so what?? lol. I also LOVE to go to the movies...the scarier the better, just none of the gory, bloody stuff.

When it comes to music, I like to listen to Reggaeton, which is like Spanish hip-hop...kinda, lol (Wisin y Yandel, Daddy Yankee... among others.) I also love to listen to 3OH!3 and Panic! At the Disco :D

Some places I would like to visit in this life time include: Greece, of course (I'd like to see where Greek mythology all started. Plus, what better place to do research than Greece itself!), Egypt, Italy, and England.

Hmmm, what else...well, my favorite number of the alphabet is Purple! :D

Where to find Lili Lost in a Book online

Lili Lost in a Book's favorite authors on Smashwords

Smashwords book reviews by Lili Lost in a Book

You have subscribed to Smashwords Alerts new release notifications for Lili Lost in a Book.

Would you like to favorite Lili Lost in a Book?

You have been added to Lili Lost in a Book's favorite list.

You can also sign-up to receive email notifications whenever Lili Lost in a Book releases a new book.