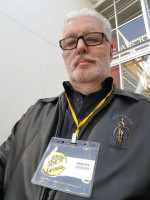 I was born in the United States into a Portuguese-American culture dominated by the Roman Catholic Church. That culture showed no room for anything but macho and tough males, who were expected to produce babies after getting married to a subservient woman. In that culture, the more tough a man looked and acted, and the higher the number of offspring he generated earned him a higher perceived masculinity.

Growing up in that culture ensured my social programming was to think that I was straight. Eventually, I discovered the truth that I am gay and then I had to redefine and remake myself.

My formal university education was in journalism, which taught me the art and craft of storytelling, photography, news reporting, etc. In the professional context, I learned that telling a story is an essential ingredient if one wants to connect with an audience.

I am unlike many gay authors. I tell stories and create illustrations about masculine men involved with one another to provoke the viewer.

Some gay men I have encountered also find it uncomfortable to witness masculine men showing sexual interest in one another. Gays relegate such masculine men to the pejorative category of being “too butch.” For all of these reasons, I choose to provoke the viewer in my stories and illustrations.

What's the story behind your latest book?
The title is "Baja Clavius" and it is a science fiction time travel adventure about agents who work on the moon for a top-secret international agency.
What motivated you to become an indie author?
Censorship. I found that it was greatly limiting to have people tell me that I could not write what I wanted to write about because they do not like the choice of words that I make or what I depict in the digital art that I create.
Read more of this interview.

Where to find Madeira Desouza online

You have subscribed to alerts for Madeira Desouza.

You have been added to Madeira Desouza's favorite list.

You can also sign-up to receive email notifications whenever Madeira Desouza releases a new book.