Having recently gotten my PhD in theatre and Hispanic literature, I am living in a rural area of Panama, working with locals, almost all of whom disappear when they learn that they must rehearse a lot to put on a decent production (a crazy life decision on my part, right?). While working on my doctorate and since finishing it, I have written three full length plays and translated another, which locals can't read, let alone act and fellow expatriates, most of who came here to die, don't care to read. (So, yes, moving here was definitely a crazy career decision on my part.) To boot, I moved to Panama to get away from the commercialize-everything insanity of the States, only to trade that for the screw-up-everything insanity of Panama. I loved my mother, but I didn't love her Latin temper, and she was more than a little crazy. Now, I have a wife with a Latin temper and more than her share of craziness. We have a currently seven-year-old son, who apparently inherited the humor gene (I swear there is one.), and I am doing everything I can to nurture it so that he doesn't go crazy. Oh, yes, I used to have an entry in Who's Who in Poetry but let it lapse when they asked for an updated biography, which I didn't provide (stupid and crazy). It should be obvious that besides earning an academic PhD, I have also earned a second doctorate in craziness. Therefore, when I comment on the subject in politics or anything else, you should take me seriously. 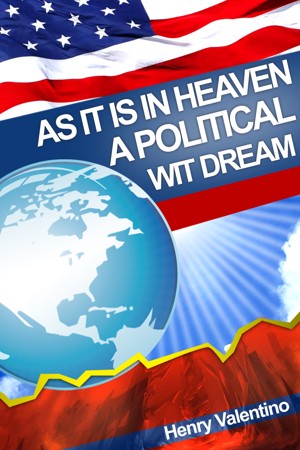 As It Is In Heaven by Henry Valentino
Price: $2.99 USD. Words: 38,370. Language: English. Published: October 25, 2012. Categories: Plays » American / African American
As It Is In Heaven; A Political Wit Dream is a satirical play that asks the question, what might have happened if John McCain had won the election in 2008? Beside being an alternative reality play, it has elements of sci-fi featuring a cybernetic being, who has a propensity for adopting musical numbers, especially from the Great Depression. Nothing's sacred, especially anything Republican.

You have subscribed to alerts for Henry Valentino.

You have been added to Henry Valentino's favorite list.

You can also sign-up to receive email notifications whenever Henry Valentino releases a new book.