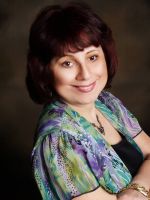 Marianna Randazzo, is the proud mother of three adult children, has been married for 33 years. She is recognized as an experienced educator; having taught students for over 30 years in New York City. A prolific writer, Marianna has been featured in popular magazines such as  Staten Island Parent Magazine and Odyssey Science Magazine. In addition, she has won writing contests for  InStyle Magazine, among others. In addition to her countless years of public service, Marianna is known  for her speech and grant writing, as well as her involvement in numerous professional development, writing and reading organizations and fund-raising efforts. She is a great follower and lover of Italian traditions and culture. She also speaks Sicilian dialect fluently.
She currently resides in Staten Island, New York with her husband and is a "grandmother" to a Cane Corso, an Italian dog.

Do you remember the first story you ever wrote?
The first story that I ever wrote was a satire. I was extremely inspired and influenced by Mad Magazine. I particularly enjoyed the segment "The Lighter Side of..." I realized that if I could take everyday topics and show the silliness and absurdities of them, I could make people laugh. I wrote a few pieces in high school about the lighter side of living with teens and the the lighter side of living in an apartment. Both were topics I had a great deal of experience with.
Then, I was always fascinated with "big words". Once I learned a new vocabulary word I embedded it into my lexicon. I became obsessed with the word 'contemplate' I played with the word until I was able to come up with a dark poem about a teenager contemplating suicide. It was so good they published it in the annual literary magazine which was a stack of pages stapled together in the middle. By today's standards, the poem would have been flagged and guidance counselors, social workers and my parents would have been called in to analyse my behavior. I am sure I would have been labeled depressed or or overanxious about something.
Much to his credit, my English teacher, Mr. Grobstein just saw it for what it was, a pretty good piece of writing where the the author convinced you of the feelings that she she had made up.
Mr. Grobstein also made us read our writing out loud, it was called 'Speech' . Those speeches gave me the backbone and courage to face an audience, a skill that came in very handy during my days as a Literacy Staff Developer for the NYC Department of Ed.
Do you remember the first story you ever read, and the impact it had on you?
Pippi Longstockings by Astrid Lindgren, Pippi was a nine year old girl who lived alone with her horse and her monkey. Her father was always off at sea or out of the picture.
Having a loving, Italian , overprotective mother who rarely let me go outside of the yard, Pippi became my escape to a world where children had unlimited freedom, superhuman strength and were able to mock and dupe the the adults they encountered. Pippi had two best friends the neighbor's children Tommy and Annika.
Moving forward, in eight grade I read Rosemary's Baby. A book not appropriate for children. The book scared the hell out of me and I still have nightmares about it.
Read more of this interview.

Where to find Marianna Randazzo online

You have subscribed to Smashwords Alerts new release notifications for Marianna Randazzo.

You have been added to Marianna Randazzo's favorite list.

You can also sign-up to receive email notifications whenever Marianna Randazzo releases a new book.