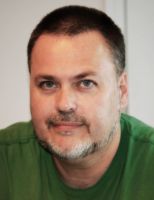 Mark Allan Reynolds was born in Louisville, Kentucky on November 16, 1962. He has lived in Louisville his entire life. He is married and has one child. His first book, GRAVE MATTERS, was published as an ebook many years before the format became so popular. It was a short story collection that eventually became DARK WONDERS, which was published by iUniverse in 2003. After years of publishing short fiction, both on the internet and in print, Mark stepped away from writing for several years. During this time, he and his wife adopted a daughter from China and they concentrated all their efforts on making her transition home a happy and healthy one. Now, with more determination than ever before, Mark returns - bringing an assortment of projects with him. First up: the Kindle release of DARK WONDERS, which will be followed in quick succession by a second short story collection, THE COLLECTOR, Mark's first novel, THE FOLLOWERS, as well as the horror/western, SUNDOWN. Mark works in a warehouse that is the inspiration for his horror novel, THE FACTORY, due for release in 2013.

You have subscribed to Smashwords Alerts new release notifications for Mark Allan Reynolds.

You have been added to Mark Allan Reynolds's favorite list.

You can also sign-up to receive email notifications whenever Mark Allan Reynolds releases a new book.