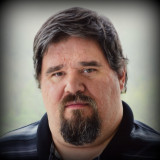 Husband, Father, Author, Poet, Former Corrections Officer. I work to survive but I write to live. I have self-published several horror short story collections. My debut crime fiction novel 'One on One' was released on Sept. 13th 2017. My first YA novel 'Endzone' was released Sept 18th 2020.

What's the story behind your latest book?
It's the story of a young man who endures tragedy and has to learn to deal with it for the rest of his life. It's about the choices he makes as he passes into adulthood and how those choices shape him for good or for bad.
It's also a story of retribution upon those who have made terrible choices and devastated the lives of others.
What is the greatest joy of writing for you?
The impetus. When I first get that flash of insight that becomes a story. Sometimes it happens all at once and I have to struggle just to get the idea down on paper (or keyboard). Other times I get an idea for a single scene of a story and I build on it from there.
It's also the chance to create. To imagine my own world and see that through to a full-fledged story. When you write fiction, there are no limits. You can do anything and that is a very empowering motivation.
I also love words. When I create that perfect line at the precise moment in a scene that makes it unforgettable, that's sheer joy.
Read more of this interview.

Where to find Michael Kelso online

One on One
One on one book trailer.

You have subscribed to Smashwords Alerts new release notifications for Michael Kelso.

You have been added to Michael Kelso's favorite list.

You can also sign-up to receive email notifications whenever Michael Kelso releases a new book.