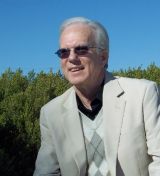 Every since my hair turned white, people keep telling me that I look like comedian and writer, Steve Martin.

And since I live in Southern, California, when people see me out and about, they sometimes think they are actually seeing Steve Martin.

Now that I made that silly statement, you're no doubt squinting at my picture right now and trying to decide for yourself if I look like that "wild and crazy guy."

But here's something cool - Steve Martin is a very accomplished and successful writer.

How I started writing

A class assignment in high school actually set me on the path to writing. Somewhere along the line I read something about stories having a beginning, middle and end. Then one day my English teacher gave the class a writing assignment. We were to write about something we liked.

At the time, I was interested in getting a Honda dirt bike, and I had been reading about them and studying them. So even though I didn't own one, I decided to write about them, and I gave my story a beginning, middle and end, just like I had read about earlier.

We turned in our papers and I quickly forgot about it -

The following week our teacher gave us back our graded papers and mine had been given a "B+." Then the teacher announced that she wanted two students to read their papers to the class. Much to my surprise, I was the first one she called on. I was somewhat stunned, but that's the moment I became a writer and a storyteller.

You see, my story had come from my heart - and your very best work comes from your heart.

My TV and movie years -

A couple of years later, I began working at KTVA Channel 11, the CBS affiliate in Anchorage, Alaska where I became exposed to the sound and tempo of the short, to-the-point writing of television commercials, public service announcements and promotional spots.

In time, I would actually be called on to write the stations announcements, then commercials and even long-form scripts.

But at the time, I didn't consider myself a writer, and the idea of writing a book, or even an article was not on my radar.

So how do you right a movie script?

Then one day I sat down to write the script for an 8mm movie that my brother Tom and I were going to shoot during the summer. I had no idea how to write a screenplay, but I wrote it anyway.

The script was really more of an outline for the story and the action, but it helped us when we started shooting our movie. The result of my screenplay was "Combat Patrol" a movie about a small group of World War II soldiers.

When our movie premiered for our cast and their families it received rave reviews. Of course they were an easy audience to please.But what I didn't know at the time was that years later I would actually become a Hollywood screenwriter.

Much to my surprise, and I'm sure to the shocking surprise felt by my elementary school, junior high school and high school English teachers - I became a Hollywood screenwriter.

The scripts I sold in that strange land called Hollywood, were family adventure stories. One script that became a movie is "The Long Ride Home" a family western starring country music singer Randy Travis, Eric Roberts (brother of Julia Roberts) and Academy Award winner Ernest Borgnine. The movie is based on my short script of the same name.

Every family has stories, and when families get together two things happen.

First, someone always starts by saying "do you remember when Bob was in..." and everyone listens and laughs at the story. Then another "remember when" story, and another, and another. Everyone laughs a lot and has a wonderful time remembering.

By the way, the second thing that happens when families get together is fighting - but I'll leave that one alone in the interest of harmony and humor.

As an adult, for years and years I had been thinking about our family stories and how much they meant to our entire family. So one day, I decided to start writing them down so that those precious stories wouldn't be forgotten.

As I sat at my computer and began to write, tears rolled down my cheeks. Some were tears of joy, but some were tears from my heart, expressing a longing we all share for those precious times we all remember from days gone by.

But when my book was completed, it was a book that had come from my heart.

Then, on the occasion of our mother's 70th birthday, I sent my mother, my sister and my brother a copy of my completed book, "Memories of my Family."

It turned out to be the best gift I had ever given to anyone in my family. The book not only captured our family stories, but it captured our humor.

One thing is for sure -

I love writing books of all kinds because I can give you valuable information that you need, and I can entertain you with fictional books too.

And you'll enjoy my humor books as well. "Humorous Stories from ALASKA... and beyond" is a collection of fun stories about growing up in Alaska.

"A super funny book that reminds us all of the foibles of growing up. Told with a great sense of humor."
Bonnie Mutchler, Author

What motivated you to become an indie author?
One day my wife said "Mike, shut up and start writing."

"Humorous Stories from ALASKA ...and beyond" came about because people are so fascinated by Alaska, and when they discover that I was raised in Alaska they always want to know what it was like to live in the 49th state. I lived thru lots of funny adventures in Alaska, so I decided to write about them.

Being an indie author means that I can write a book and have it published quickly online using Smashwords.
How has Smashwords contributed to your success?
I can't believe you just asked me that question, because using Smashwords to publish "Humorous Stories from ALASKA ...and beyond" meant that I could get my book out to a wide variety of book distributors very quickly - and in turn, more readers.

And Smashwords is so easy to use - which is a good thing for me. I even convinced my wife to publish her children's book, coloring book using Smashwords.
Read more of this interview.

You have subscribed to alerts for Michael R Dougherty.

You have been added to Michael R Dougherty's favorite list.

You can also sign-up to receive email notifications whenever Michael R Dougherty releases a new book.