A word from the Author of The Vicarage Bench Series…
I’ve taken early retirement on Vancouver Island to spend my days and many nights hovering over my computer and spinning the stories that have been vying for attention over the years.
My husband is supportive and drags me out to feed me and plans occasional forays into the outside world. I have a son who makes me happy I was born a woman so I could be his mom, and a niece whose family adds to my full cup of happiness.
Gardening lights my inner fires, and I need no urging to get out into the yard when the weather dictates. I do have many hobbies such as quilting, crocheting, but alas – no time.

What’s the story behind my latest Series?
Okay, this is a true tale; I swear it on my goldfish Sammy’s life. Hey, he’s a nice goldfish!
So, I was driving somewhere?? and Elvis’ sexy sound came on the radio singing “She Not You”. I found myself enjoying singing along. Funny how I remembered those words from the 1960’s? In fact I remembered them so well that over the next week they wouldn’t get out of my head. "And it’s breaking my heart, cause she’s not you!" Near drove me crazy. Then I had this epiphany. Wouldn’t the song make a great story??! Just for fun, I sat down and wrote the first chapter and the book began. It turned into one of my favorite novels –could be because I made it my 2014 Christmas story and I love that season or maybe because I saw Elvis every time I wrote about Jesse, the hero. Let me tell you - having that dreamy man in my head for two months was certainly no hardship. I had planned to write a single book until I realized he had so many wonderful love songs that could made into stories and so I called “She’s Not You” book #1 of the Elvis Series and set up a contest on Fresh Fiction for readers to choose the next title. The winner was chosen and her favorite song was Love Me Tender. I’m plotting this new book as I write this interview. Check out my blog: http//:mimibarbour.blogspot.com for the follow up on where this series will go next.
What's the story behind your latest book?
My latest book is called Together Always and 36,000 words of that story have sat in a file on my desktop for over two years. You see, when I first started writing the Vicarage Bench Series, I was signed with Wild Rose Press and had contracted that series with them. In fact, the first five novels I wrote were their books. Then, I decided to go Indie with my next series, Angels with Attitudes, and the first book, My Cheeky Angel, sold a great deal better than what I had experienced with the publisher. So, not needing a kick in the petudie to wake up and smell the roses, I stopped writing Together Always because I knew they had first dibs while I was still under contract. I decided to wait until the end of my commitments before finishing the book. Now, as of November 2013, I have all my rights returned and am no longer obligated to them. So, while on holidays just recently, I decided to take a look at this story and I was shocked at how many words I’d actually written. After I began to read the work over, I was hooked. Laughing and weeping, I found myself so wrapped up in the plot, that I now can’t wait until I finish it and can offer it to my readers.
Read more of this interview.

Where to find Mimi Barbour online

My Cheeky Angel
With the help of a quirky angel, a lonely tomboy shifts personas, changes lifestyles and becomes a busy and powerful businesswoman. By doing so, she risks losing the man she loves and ignores a young girl who’s desperate for her help.

Together For Christmas
Christmas story of spirit-travel and romance. This book finalled in the Gayle Wilson contest 2012 Mimi's favorite book so far...

Angels with Attitudes by Mimi Barbour 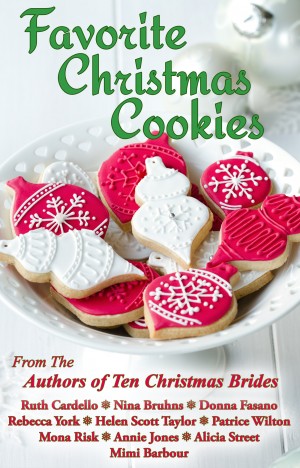 A book full of delicious cookie recipes to share with the family this Christmas! In this book, you’ll find favorite cookies of the heroes and heroines in the Ten Christmas Brides romance-novel boxed set. They are the authors’ gifts to you this holiday season. Enjoy these special goodies and have a wonderful Christmas. Best wishes from the authors of Ten Christmas Brides! 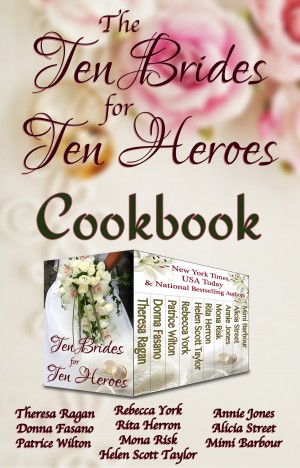 Ten Brides for Ten Heroes Cookbook by Helen Scott Taylor, Theresa Ragan, Donna Fasano, Patrice Wilton, Rebecca York, Rita Herron, Mona Risk, Annie Jones, Alicia Street, & Mimi Barbour
Price: Free! Words: 6,170. Language: English. Published: June 19, 2014. Categories: Nonfiction » Cooking, Food, Wine, Spirits » General cookbooks, Fiction » Romance » Contemporary
This cookbook contains twenty recipes that go with the Ten Brides for Ten Heroes collection—two favorites from each of the authors. All are tied to the stories in the boxed set. These recipes are the authors’ gifts to our readers. It’s our pleasure to share a little more of what makes our writing meaningful to us. We hope you’ll think of Ten Brides for Ten Heroes when you make these tasty dishes. 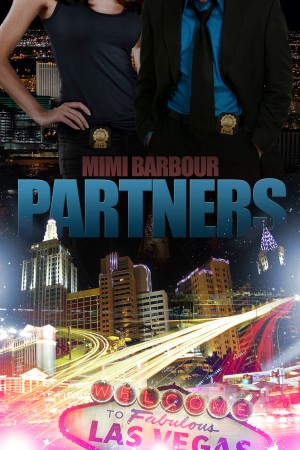 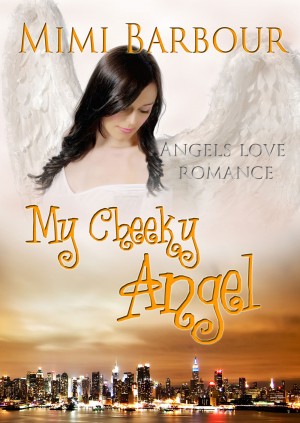 You have subscribed to alerts for Mimi Barbour.

You have been added to Mimi Barbour's favorite list.

You can also sign-up to receive email notifications whenever Mimi Barbour releases a new book.