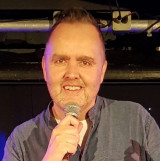 Standup comic and writer, Mo has taught kids, sold his soul in a telesales sweatshop, flipped burgers on a motorway and flatly denies being fifty.

'The Armchair Bride' was shortlisted for the Arts Council England 'Book of the Year' award. As well as writing for several anthologies, Mo's work has appeared in The Observer, The Guardian and Irish Independent.

What is your writing process?
It kinda depends. With a short story, things tend to grow from a single scene. I might write some dialogue; often a conflict of some kind. Then I get to work out what came before and where we go next. Oftentimes, the story self-suggests based on whatever words get exchanged. With full-length fiction, I plan more. That said, I'm not obsessive. I don't paper walls with notes. I do like to know what the story might be and work out what I want to say, but otherwise, I dive in and create a first scene to grab my attention. I'll let you in on a secret though. Rarely does that first scene make the final draft. It's the peg on which I hang my writing coat. The starting point. Until I really know the characters, I have no clue what the true story might be. With 'The Armchair Bride', I thought the story was of someone fed up of being single. Turns out it was a story of how the grass looks greener from opposite sides of the same fence.
What's the story behind your latest book?
'The Toast of Brighton' is the story of Evie. We meet her flying high, schmoozing with the best, career building and taking the first steps to motherhood. But then, she loses the lot. At first, she's in denial, she gets angry, and needs to apportion blame. Something happens that resets her life and she teams up with her best friend to try something new. All through, there's a slow burn romance that catches on fire without warning and she needs to work out which path to follow. Everything in this new book came from a year of my own life where someone tore the rug from under me with no warning. I wanted to deal with the baffled anger and frustration. When your trust is broken, you can so easily take the path into darkness. Hopefully, Evie gets it right, but even at the end, you're left wondering 'what if'.
Read more of this interview.

Where to find Mo Fanning online

You have subscribed to alerts for Mo Fanning.

You have been added to Mo Fanning's favorite list.

You can also sign-up to receive email notifications whenever Mo Fanning releases a new book.