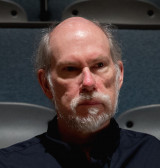 Stephen A. Schrum, PhD, is a theatre director, performance poet, playwright, novelist, graphic novelist, virtual worlds theatre director, and Steampunk maker. Notable past RL (real life) productions include: Shakespeare’s Twelfth Night (set in 1995) and Macbeth (performed in a cyberpunk style); Moliere’s The Miser (done in period costume) and The Misanthrope (set in the era of Disco); Sarah Kane’s 4:48 Psychosis (utilizing both the Japanese dance-drama form Butoh and hallucinatory soundscapes that Schrum created). With the research area of “The Perception of Presence in Virtual Performance,” he has directed virtual productions of The Bacchae and Prometheus Bound in Second Life (SL). He began teaching with technology in 1993, and since then has been writing and presenting on the topic, including editing the book, Theatre in Cyberspace: Issues of Teaching, Acting and Directing (2000). More recently he has turned his attention to Transhumanism, with a side-detour into Steampunk. Stephen is also interested digital filmmaking; check out his work on his youtube channel.

Where did you grow up, and how did this influence your writing?
As a child, I didn't have a lot of friends, so I spent a great deal of time reading. When I was too young to go to the adult area of the local community library, I tried hard to find interesting things to read in the children's wing. Two things that intrigued me were books of home science experiments, and books of mythology. I started reading the earliest stories of humankind a bit early, and I think those stories, along with a later study of Joseph Campbell, explains why there's a lot of myth and allegory in my writing.

In high school, I tried writing fiction, and also wrote out play versions of science fiction stories. The latter were never performed, but it did hard wire me for later playwrighting--seeing how those stories were structured, and how that might be performed.

Right after high school, when I didn't understand financial aid, and was stuck not going off to college for filmmaking, I decided I wanted to be a writer. I did this by writing a horrible novel. It was basically what really happened to me during the final weeks of high school, before and right after graduation. Write what you know? I didn't know much then, confined to that small town. Eventually, college got me out of that area and into the wider world.
What motivated you to become an indie author?
I bought those Writer's Market books, and looked through them to see what publisher or magazine might publish my work. Ah, those rejection slips! It was clear that, if I wanted to be published, it had to be a full-time job. But being a college professor is my full-time job.

I heard a story on NPR that mentioned smashwords, and checked it out. Major publishers are nice, but apparently not for me, at least not yet. So why not dip a toe in the water of the modern world, and try an ebook?
Read more of this interview.

Where to find Stephen Schrum online 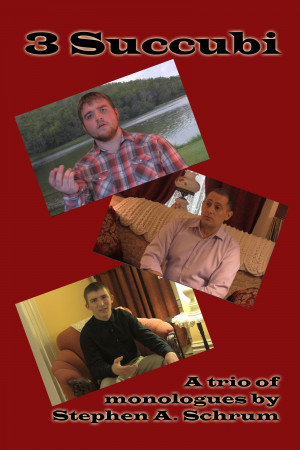 3 Succubi by Stephen Schrum
Price: $1.99 USD. Words: 4,360. Language: English. Published: December 18, 2017. Categories: Plays » American / African American
A trio of monologues that present the stories of three men who had been through some sort of abduction experience, but not always an abduction by aliens. We read of a Shaman who encountered a Water Spirit, an Internet Surfer with a Cyberlover, and an Average Man with (well, there had to be some in there somewhere!) a host of Grey Aliens. Each man discusses his experience and its result. 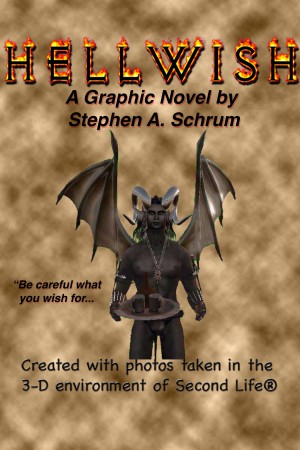 In a small town, a coma patient is believed to be a conduit to the afterlife. When someone makes a wish, it comes true. People start lining up to make their wishes—until Hell begins to pave its way to the town with a portal and an occupying demon force. Who can stop them? Martin Lightborn, demon hunter, who left the priesthood after he was ordained, but never left the service of God. 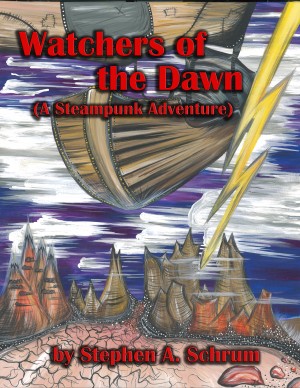 While searching for the First Vampyre, whose minions destroyed her hometown, Aemelja Umber encounters Stephano Alchimi, an immortal alchemist. She joins him and his order, the Vigilum Aurorae (the Watchers of the Dawn), who seek to end the source of ultimate evil in the world. WOTD is also an allegory: of corporate America, the promises/pitfalls of science and technology, and consumer culture. 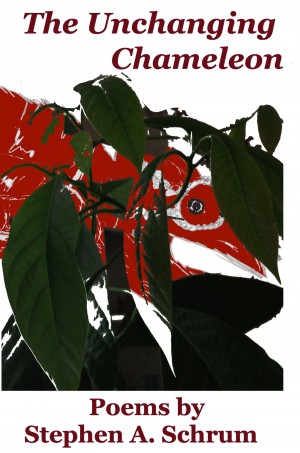 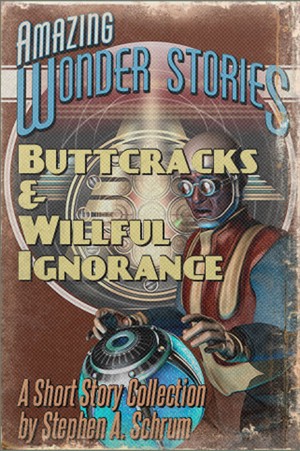 In answer to your question, “What’s with the title??” it comes from Schrum’s answer to the Bernard Pivot Personality Profile question, "What turns you off?" ("Buttcracks and willful ignorance!”) The volume contains a representative sampling of Schrum’s fiction and nonfiction writing from 1977 to (almost) the present. 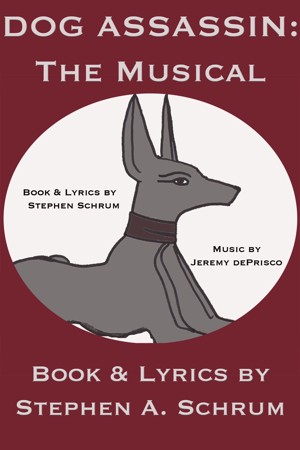 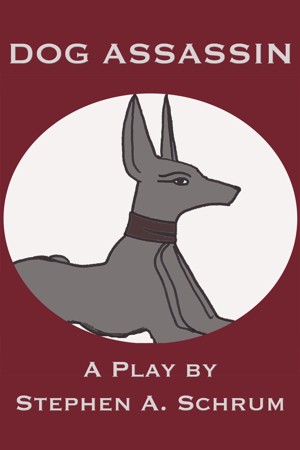 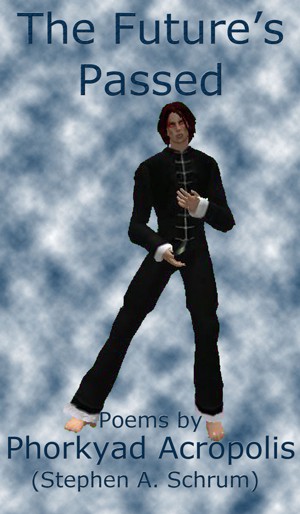 A collection of poems by Phorkyad Acropolis, the performance poet avatar of Stephen A. Schrum. 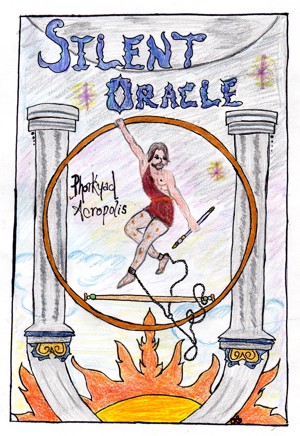 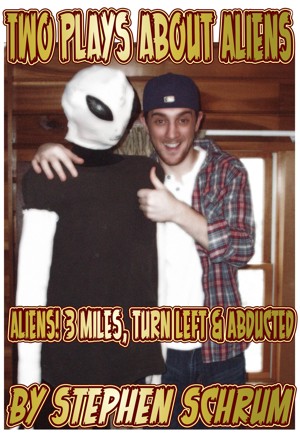 Two Plays About Aliens by Stephen Schrum
Price: $0.99 USD. Words: 7,370. Language: English. Published: April 23, 2013. Categories: Plays » American / African American
This book contains "Aliens! 3 Miles, Turn Left," a monologue by a man who, one night, found aliens in his backyard, and "Abducted!" a one-act play about the investigation into the disappearance of two children, whose mother claims they were adbucted by an alien spacecraft. 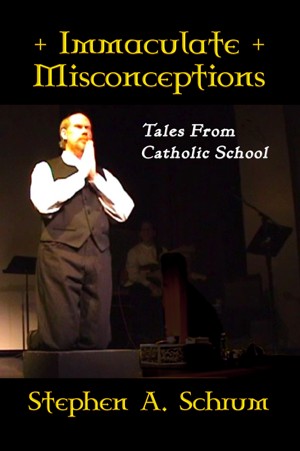 This book is an amusing (and often serious) memoir of life growing up in Catholic grade and high school. The designation, "Immaculate Misconceptions," applies to the simplistic explanations, half-truths, canonical misinterpretations, and outright disinformation received from the author’s teachers who sought to inscribe their version of the world on his young mind.

You have subscribed to alerts for Stephen Schrum.

You have been added to Stephen Schrum's favorite list.

You can also sign-up to receive email notifications whenever Stephen Schrum releases a new book.