Hilary Laidlaw is a lawyer specializing in estate and trust law, Hilary has spent over thirty years in private practice with one of Canada's largest law firms, and appears as a frequent lecturer and speaker both within and outside the legal industry. Away from the office, Hilary's pursuits include the study, practice and teaching of various alternative healing therapies. An avid runner, Hilary has completed over 20 half-marathons throughout Canada and the United States, along with the occasional (reluctant) duathlon. Hilary works in Toronto, but lives—and breathes with ease—in Collingwood, Ontario with her husband and son (co-author, John).

John Sandham, born thirty-some years too late, most of his friends will tell you John is a 50-year-old trapped in a 23-year-old's body. Common nicknames include "dad," and "grandpa John." He thinks those are rather appropriate considering his proud ownership of a dad bod (they're all the rage these days) and encyclopedic knowledge of dad jokes. He is, as of publication time, single with no kids. Some of John's more annoying traits include: showing up promptly on time to house parties, buying concert tickets before knowing if he'll actually be able to go, and being terrible at responding to texts in a timely manner. John has a degree in journalism, but isn't quite sure why, since he had to pay in order to produce work he could have been getting paid for. He somehow found work in his industry, though, and now talks on the radio for a living. 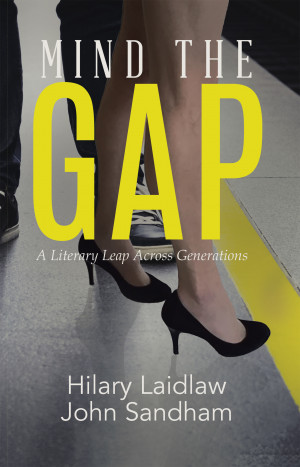 Mind the Gap: A Literary Leap Across Generations by Hilary Laidlaw & John Sandham
Price: $9.99 USD. Words: 45,060. Language: English. Published: April 5, 2019 by Tellwell. Categories: Nonfiction » Parenting » Reference
Does each generation necessarily stand on its own, divided from all others by a gap in perspective and understanding? Is meaningful communication between generations an impossibility? Mind the Gap puts this notion to the test in a unique mother-son literary collaboration. By challenging each other to write with openness and honesty...

You have subscribed to alerts for Hilary Laidlaw.

You have been added to Hilary Laidlaw's favorite list.

You can also sign-up to receive email notifications whenever Hilary Laidlaw releases a new book.