Vincent Michael dela Luna was born on June 9, 1975 in Manila, Philippines. His father, Antonio, and mother, Maria, moved the family to Hamilton, Ontario, Canada in 1977 with little more than the clothes on their backs. Vince has two younger sisters, Antonette and Jennifer.

As Vince grew older, his life took him on his own adventures. He spent time in Rome, London, Toronto, Vancouver, Manila and Honolulu. Vince then returned to Canada to live in Edmonton where he decided to publish his first book.

During a twenty-year span living in Vancouver, British Columbia, Canada, where he made movies and television shows, he met and married his wife, Chix, and assisted in the creation of his two most favourite people, Nic and Izzy. It was also in Vancouver, where Nic and then Izzy were both diagnosed with autism. After years of watching his children grow on opposite sides of the autism spectrum and with Izzy's struggles increasing due to the severity of being non-verbal, Vincent recognized the need to stop working in film and start caring for his children full-time.

As Nic and Izzy went about their own adventures, they taught their father the meaning of patience, love, and understanding, and showed him the need for everyone to better understand autism, not just to rid the world of the fear and stigma of it, but simply to help everyone become better and kinder human beings.

And so, begins his first story, designed for children, to try and answer some of their endless questions about Izzy and her autism and why she does what she does. 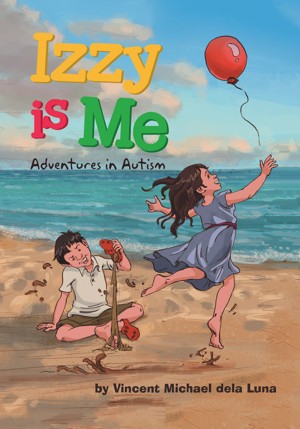 Izzy Is Me: Adventures in Autism by Vincent Michael dela Luna
Price: $3.99 USD. Words: 80. Language: English. Published: November 25, 2020 by Tellwell. Categories: Nonfiction » Children's Books » Social Issues / Special Needs
This is a funny story about a young girl named Izzy, who has autism and goes to school but still can't talk. While she may have trouble saying things, Izzy loves to express herself using all of her senses. She loves to smell, see, hear, taste and touch just about everything and would like to share with you a glimpse of why she does the things that she does.

You have subscribed to alerts for Vincent Michael dela Luna.

Would you like to favorite Vincent Michael dela Luna?

You have been added to Vincent Michael dela Luna's favorite list.