You’re wondering what kind of a person wrote, what I call, ‘The Hitler Chronicles’. Let’s see, I’ve worked in media most of my life, print/audio/video. Most of my writing has been for commercial use, as well as a few ‘how to’ books published years ago.

My books are a satirical thought experiment: what if one of the many early leftist proponents of eugenics took power instead of Hitler? What would the world be like if, instead of a Nazi/racial nightmare there was a socialist one? This is explored over the entire series as a subplot.

Why this series? Growing up I moved to Vancouver, Canada, for a year. Canadian history was pretty dull. Except the odd stuff they don’t talk about. For example: the man who started their Universal Health Care, Tommy Douglas, (Keifer Sutherland’s grandfather), was voted ‘Greatest Canadian Ever’.

He also ‘proposed a system that would require couples seeking to marry to be certified as mentally fit. Those judged "subnormal" would be sent to state camps, those mentally defective would be sterilized.’ Really. Jack Bauer’s granddaddy.

But this series is not just a thought experiment, it’s a fun satire on contemporary values set in the 1930’s with lots of historical twists.

Who will enjoy reading my books? Maybe not Canadians, but if you are a history junkie, like satire, like mashups - Pride and Prejudice and Zombies (without the Zombies) - and those who like totally off the wall humor with a tall order of parody mixed in, give Adolf a chance to get into your heart. 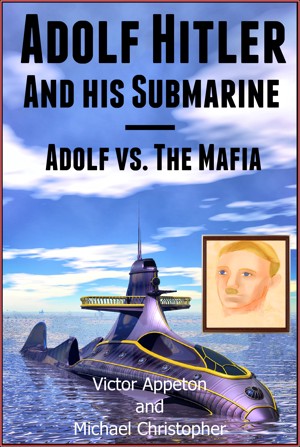 Adolf Hitler and His Submarine or Adolf vs. the Mafia by Michael Christopher
Price: $2.99 USD. Words: 61,940. Language: English. Published: November 13, 2012. Categories: Fiction » Humor & comedy » Black comedy, Fiction » Mashups
Book 4 of the Hitler Chronicles. In this satirical mashup novel our hero, Adolf Hitler, seeks Canadian gold laying in a sunken ship. He and his father take their new submarine, The Sea Lion, and battle the evil eugenics Prime Minister Tommy ‘The Needle’ Douglas and his grandson, Jack Beck, the Mafia, and their submarine, The Stugots, the swarthy Brazilian navy and discover counterfeit money. 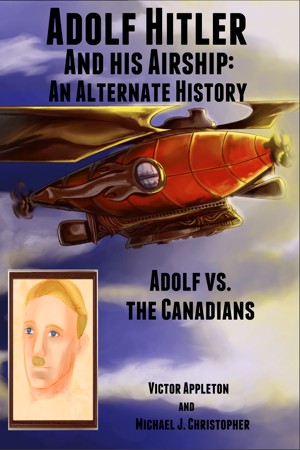 Adolf Hitler and His Airship: An Alternate History by Michael Christopher
Price: $2.99 USD. Words: 63,870. Language: English. Published: October 24, 2012. Categories: Fiction » Mashups, Fiction » Humor & comedy » Parody
It’s the 1930’s. Young American Adolf Hitler, inventor of an Airship is framed for robbery by agents of the Canadian Dictator Tommy ‘The Needle’ Douglas. Douglas is an eugenics fanatic, and will stop at nothing to ‘Get Hitler’. Meet Al Speer, Jesse Owens, Dr. Norman Bethune, Sheriff Joe Arpaio, and evil Winnie Churchill in this mashup novel and satiric parody. Part of the Hitler Chronicles.

You have subscribed to alerts for Michael Christopher.

You have been added to Michael Christopher's favorite list.

You can also sign-up to receive email notifications whenever Michael Christopher releases a new book.