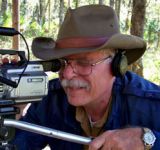 Nicola Cuti worked as editor, artist and writer for such distinguished comic book companies as DC, Marvel, Charlton and Warren(publisher of "Creepy" and "Vampirella" comics). He created numerous characters including superhero "E-Man", still being published today and the underground classic, "Moonie", which has appeared in men's magazines in full color and in fine collections as Mark Estren's scholarly book "A History of the Underground Comics". He is a two-time winner of the Ray Bradbury Award for writing excellence and a 2009 Inkpot Award winner for his work in Comic Art.

Later, Nick moved his wife and daughter to California where he began a new career in animation as a background designer. Such studios as Disney, Universal, Warner Brothers, Marvel Films, Graz Entertainment, Sunbow and Sony Pictures employed him on the following projects “Conan”, “Gargoyles”, “Jungle Cubs”, “Dilbert”, “Biker Mice From Mars”, “Exo-Squad”, “101 Dalmatians” and “Starship Troopers” and others.

For the past decade his interests have turned to live action and screen writing where he has been developing a live action series "Captain Cosmos, the Last STARveyer" a science fiction/science fact adventure program for children. "Cosmos" has won the KIDS FIRST! Seal of Approval for excellence in children's video and has been selected for the Kids First! Film Festival. He worked with an independent movie company, Creature Productions, where he produced and wrote three movies for them, "The Gray Ghosts" "Planet of the Reptiles" and "Grub" and has written several screenplays for their future productions.

In 2010 Nick started his own company, Ni-Cola Entertainment LLC, where he wrote and produced a sci-fi movie “Tagged!” and three illustrated novels, “Moonie and the Spider Queen”, “Moonie in the Slave Market of Opuul” and “Moonie in Too Many Moons”.

For more information please see his listing in Wikipedia.

Where to find Nicola Cuti online 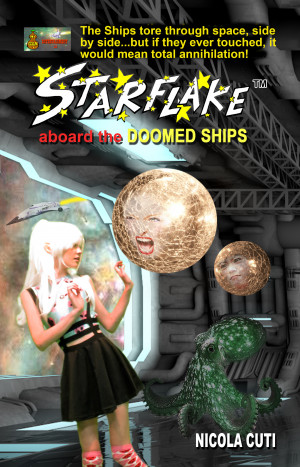 Starflake Aboard the Doomed Ships by Nicola Cuti
Price: $2.00 USD. Words: 43,200. Language: English. Published: January 26, 2018. Categories: Fiction » Science fiction » Space opera
The luxury passenger starship, Alpha Centuri, accidentally pulls a ship out of an antimatter universe and the ship, called the Beta Centuri, is linked to the Alpha. The two ships, a gravity ship and an anti-gravity ship, are held to each other in perfect balance, but if either ship waivers even a hair from this unholy alliance then they will touch and annihilate each other. Hundreds of lives are a 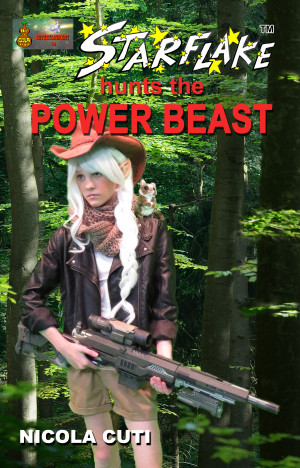 Starflake Hunts the Power Beast by Nicola Cuti
Price: $2.00 USD. Words: 44,440. Language: English. Published: January 26, 2018. Categories: Fiction » Science fiction » Space opera
The POWER BEAST crash lands on Starflake's asteroid and steals the Starflake's dragon, Molly, to make her escape. Starflake is determined to get Molly back and when the intergalactic hunter, Beowolf Gent, tracks the Beast to her asteroid, Starflake decides to joins him in the quest to end the Beast's reign of terror. 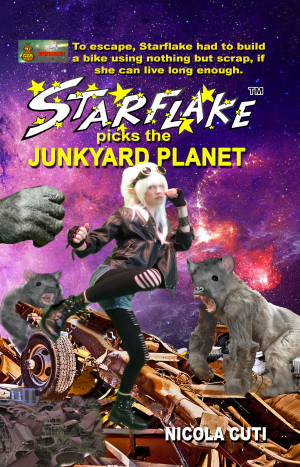 Starflake Picks the Junkyard Planet by Nicola Cuti
Price: $2.00 USD. Words: 41,810. Language: English. Published: January 19, 2018. Categories: Fiction » Science fiction » Space opera
Taking off on her rocket-cycle, Starflake, the girl who can live in space, is set for a visit to the Deep Space Ranger Academy, when the engine quits. Her bike is caught in the grip of the gravitational field of the Junkyard Planet where her cycle goes up in flames. Her only hope for escape is to roam the bizzare world of junk and put together a new bike but weird of creatures protect the junk 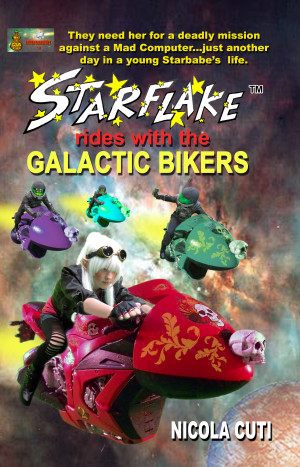 Starflake Rides with the Galactic Bikers by Nicola Cuti
Price: $2.00 USD. Words: 44,680. Language: English. Published: January 19, 2018. Categories: Fiction » Science fiction » Space opera
An expedition to the planet Kafka by Deep Space Ranger Cadets turns deadly when their minds are taken over by a mad computer known as ALIEC. Only four of the cadets manage to escape. They vow to return, but their only chance to carry out their mission lies in the abilities of a young Starbabe named Starflake. She is tiny enough to maneuver the tunnels leading to ALIEC. 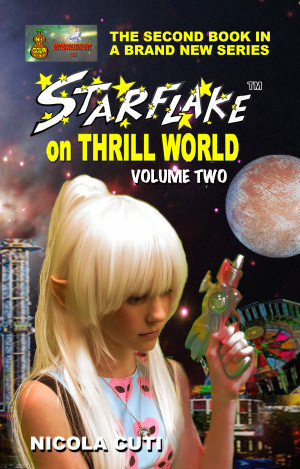 Starflake on Thrill World Volume 2 by Nicola Cuti
Price: $2.00 USD. Words: 33,210. Language: English. Published: January 19, 2018. Categories: Fiction » Science fiction » Space opera
Starflake, the girl who can live in space, is trapped on Thrill World, once a haven for sick alien child but now a corrupt world where children are hunted for salvery. Using only her wits, Starflake must escape all of her enemies in order to expose the planet to the Deep Space Rangers. 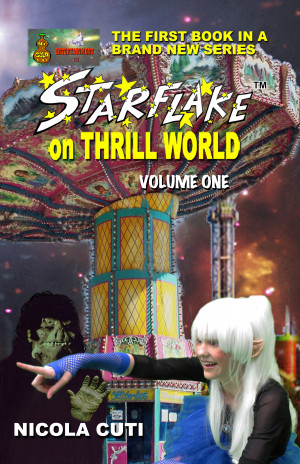 Starflake on Thrill World Volume 1 by Nicola Cuti
Price: $2.00 USD. Words: 31,460. Language: English. Published: January 19, 2018. Categories: Fiction » Science fiction » Space opera
Thrill World is a planet designed to be a haven for children who have been infected with alien diseaseshas allowed to degenerate into a shantytown where smugglers and slavers hunt for innocent children. Only Starflake, the girl who can live in space, is able to expose the corruption.

You have subscribed to alerts for Nicola Cuti.

You have been added to Nicola Cuti's favorite list.

You can also sign-up to receive email notifications whenever Nicola Cuti releases a new book.