Nicola C. Matthews was born in September 1975 in Biloxi, MS. Raised in southern Mississippi, she still resides in her small hometown with her husband of over twenty years, their three children, and their pet Yorkie, Lily-Claire. She loves music and her favorite thing to do to de-stress is crank up the tunes and hit the treadmill. Nicola enjoys reading as well as watching movies, shopping, and meeting new people. Her favorite genres include mystery thrillers and supernatural/fantasy movies and books.

Nicola’s love affair with reading and books first began at the age of seven, when she immolated her favorite author at the time, Dr. Seuss. As the years passed, her passion for writing and reading turned into a way to escape a broken and oftentimes violent home life. She funneled her love for all things creative into her writing, penning her first novel at the age of thirteen.

Throughout high school, Nikki would continue to pen two additional novels and a host of short stories and poems. At the age of fifteen, she began her journey into the publishing industry, spending her weekends at the local library researching the industry, writing query letters, and sending out sample chapters to publishers.

By her graduating year, Nicola had racked up several hundred rejection letters from every publisher she could find. Undaunted, she continued to write over the years, but raising a growing family took precedent over her fledgling career. In 2006, at the urging of a large social media audience through her Yahoo!360 page, she began to research self-publishing. In 2009, her first novel Temptation was published under her own publishing house. After taking a break to finish her business degree, Nicola continued to write and publish under her house name.

Various shorts, including bestsellers “The Devil’s Slave” and “Master” published periodically from 2011 – 2013.

The Red Fang, the first book in the BEFORE THE SUN RISES SERIES, published in June 2011, and would be relaunched through the BOOKTROPE EDITIONS brand in August 2015. After the publisher closed its doors in May of 2016, the book was relaunched through X-Cite Press, an imprint of X-Isle United Publishers.

Immortal Sins, the second book in the BEFORE THE SUN RISES SERIES published in 2014.

Nicola would team up with a fellow erotica writer and release a new romantic comedy series, SWEET SEDUCTIONS. The first two books in the series, The Taming of Andy Savage and Collaring Ash were released in November 2015 and February 2016 respectively.

Today, Nicola works full time for a multi-million-dollar technology reseller and continues to write and publish under her house name. Her lifelong dream, aside from one day becoming a NYT Best Selling Author, is to help other writers realize their dream of becoming published authors.

Do you remember the first story you ever wrote?
The very first story that I "tried" to write was a story called WHITE LIGHTNING and was about a girl who received a magical white horse for her birthday. The horse was named White Lightning and had the ability to take her to whatever fantasy land she could dream of.

The very first story that I actually wrote to completion was a romantic thriller called Big Dreams and Nightmares. It was about a fourteen year old girl who fell in love with the oldest son of her father's latest girlfriend. Turns out he was not what he appeared and she ended up in a parallel universe trying to find out how to escape.
What actually got you into writing? What was your inspiration for sitting down and writing that first story?
I always loved to read. I first fell in love with the written word when I was about six, when I started a yearlong reading love affair with Dr. Seuss. When I discovered that I could make up and write down my own stories to amuse myself, I quickly realized that I would rather create my own worlds and characters than I had to read what others had written. It just progressed from there. I originally wrote just to amuse myself. As time went on and more people read my stories and I received positive feedback, I discovered that I wanted to share my creations with everyone.
Read more of this interview. 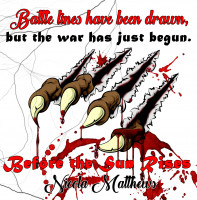 Before the Sun Rises by Nicola C. Matthews
Join Ethereal, Stealth, Requiem, Nikkolas, and their families as they try to put an end to the Shield of Humanity once and for all. Romantic paranormal action/adventure. For 18+. Contains graphic violence and sexual scenes. **NOTE** Each book must be read in order. 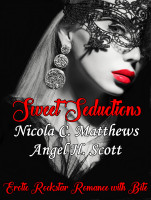 Sweet Seductions by Angel Scott
& Nicola C. Matthews
Join the members of the world-renowned vampire metal band White Coffin as they enjoy their immortality - along with all the pleasures it can bring. Romantic sexy comedy. 18+ only. Includes graphic sexual content. **NOTE** each book is a complete story unto itself and can be read in any order. 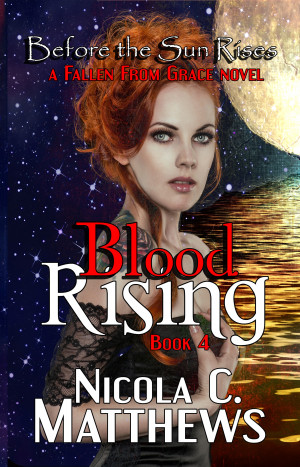 Blood Rising: a Fallen From Grace Novel by Nicola C. Matthews
Price: $4.99 USD. Words: 88,290. Language: English. Published: August 31, 2018 by X-Isle United Press. Categories: Fiction » Fantasy » Paranormal, Fiction » Science fiction » Adventure
Who would win in the war to save humanity when everyone seemed hell-bent on destroying each other? Who could be trusted when no one was what they appeared to be? In this new world where the lines of humanity and the supernatural have been blurred, it was becoming increasingly harder to figure out who were friends – and who was the enemy. 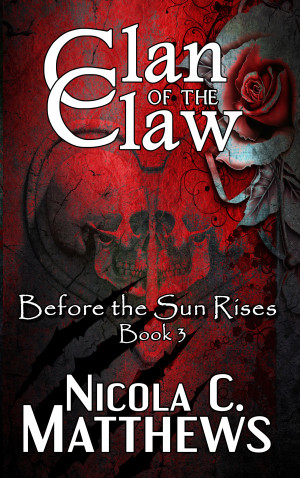 Clan of the Claw by Nicola C. Matthews
Series: Before the Sun Rises. Price: $4.99 USD. Words: 55,030. Language: English. Published: January 15, 2018 by X-Isle United Press. Categories: Fiction » Fantasy » Paranormal, Fiction » Science fiction » Adventure
Ethereal sets out to fulfill a promise to Nikkolas Redpaw, the werebear who sacrificed himself for the sake of her family while fighting the Shield of Humanity. She travels to the northern regions of Alaska in a search to find any surviving member of his once great clan. What she discovers there could be the beginning of something truly wonderful – or the end to a tale five years in the making. 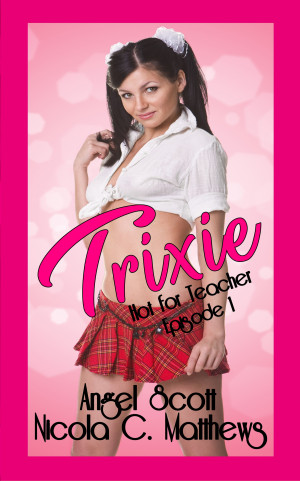 Trixie by Nicola C. Matthews
Price: $2.99 USD. Words: 19,130. Language: English. Published: April 23, 2017 by X-Isle United Press. Categories: Fiction » Erotica » Romance, Fiction » Erotica » Women's Erotica
Trixie Turner has had her eye on her criminology professor all semester. She’s done everything in her feminine arsenal to get him to notice her, all without success. Will Trixie's desire for Professor Davenport catch her a passing grade, or something even *she* had not bargained for? 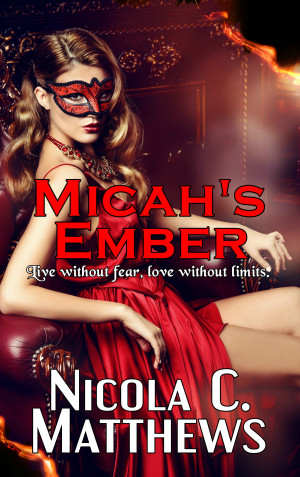 Micah's Ember by Nicola C. Matthews
Price: $5.99 USD. Words: 50,300. Language: English. Published: March 7, 2017 by X-Isle United Press. Categories: Fiction » Erotica » Romance, Fiction » Romance » Fantasy
When Micah Vaughn sends a private message to one of his fans, he never dreamed it would lead to one of the kinkiest relationships he has ever experienced. What starts out as a strange pastime soon blooms into a relationship he had no idea he had been secretly craving. Can his relationship lead to anything other than a fetish-obsessed relationship, or can he find true love with an older woman? 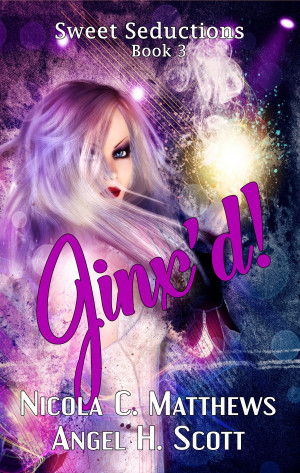 Jinx'd! by Nicola C. Matthews & Angel Scott
Series: Sweet Seductions, Book 3. Price: $2.99 USD. Words: 58,190. Language: English. Published: December 17, 2016 by X-Isle United Press. Categories: Fiction » Erotica » Paranormal, Fiction » Romance » Paranormal
Finding himself in a dangerous situation, Jeremy must make a painful decision – can he live with himself if he turns Alicia into a vampire, or can he learn to live without the woman whose impossible klutziness has somehow managed to steal his heart? 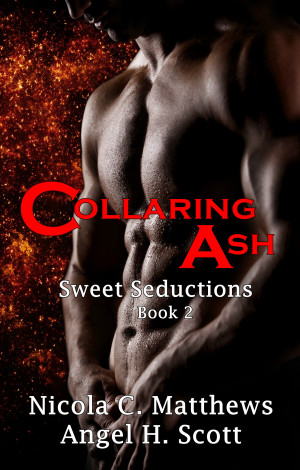 Collaring Ash by Nicola C. Matthews & Angel Scott
Series: Sweet Seductions, Book 2. Price: $2.99 USD. Words: 41,070. Language: English. Published: December 17, 2016 by X-Isle United Press. Categories: Fiction » Erotica » Paranormal, Fiction » Romance » Paranormal
In life, you only get one chance at love, even when you are a vampire. Brandi and Angela are everything he has never been attracted to, but inside they are the kinkiest set of women he has ever known. How is he supposed to choose between love and lust when they are both so very bad for him? Will his hunger for these two lead to ever-lasting love, or to a freaky obsession too wild to be tamed? 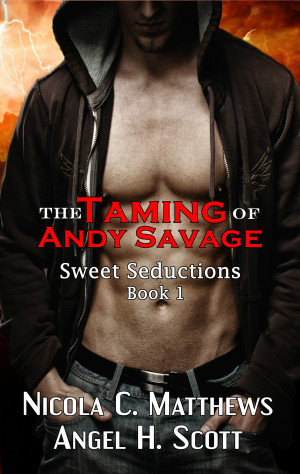 The Taming of Andy Savage by Nicola C. Matthews & Angel Scott
Series: Sweet Seductions, Book 1. Price: $2.99 USD. Words: 43,640. Language: English. Published: December 17, 2016 by X-Isle United Press. Categories: Fiction » Erotica » Paranormal, Fiction » Romance » Fantasy
For Nicolette Vampskin, it had always been about the sex. At least it was, until a chance one-night stand with the tall frontman of White Coffin turned her entire world upside-down. What happened to the once proud fang-whore who was content to bang half the vampire bands in the world? Yeah, it's all pervy fun until someone ends up dead. 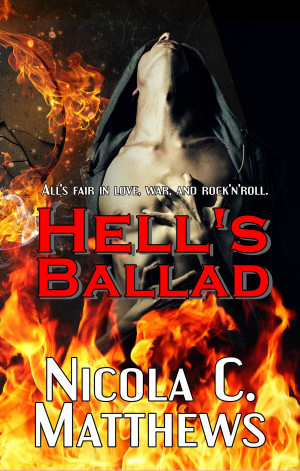 Hell's Ballad by Nicola C. Matthews
Price: $4.99 USD. Words: 38,660. Language: English. Published: December 16, 2016 by X-Isle United Press. Categories: Fiction » Romance » Fantasy, Fiction » Romance » Paranormal
Jax Monroe has everything he has ever dreamed of - but he also has a secret so dark, so destructive, it will one day consume his entire soul. His bargain must be upheld, but when Eva walks back in his life, he begins to question his blood oath, wondering if he has made the right choices. Will his pact be too strong to break, or can love true conquer all? All's fair in love, war, and rock'n'roll. 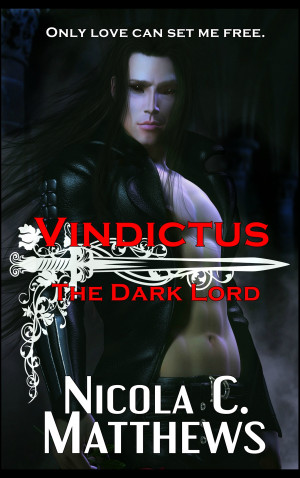 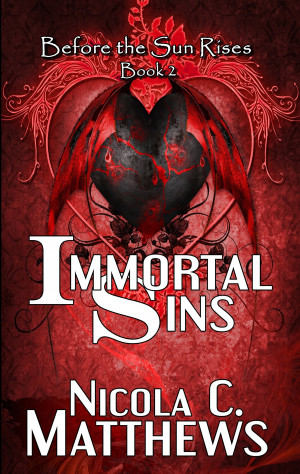 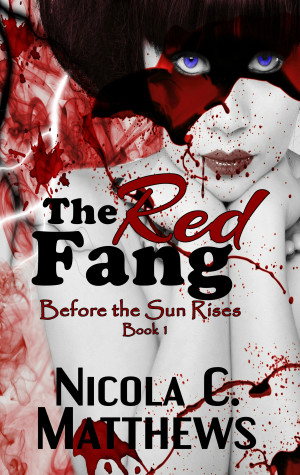 The Red Fang by Nicola C. Matthews
Series: Before the Sun Rises, Book 1. Price: $0.99 USD. Words: 48,680. Language: English. Published: December 16, 2016 by X-Isle United Press. Categories: Fiction » Romance » Paranormal, Fiction » Urban
Hopeless, pointless. Those were the words on the lips of everyone still left standing in our small, supernatural community. The vampire Stealth had barely escaped with his immortal life after the Shield of Humanity attacked his home, a home which now lay in ruins on the outskirts of Shadow Cove. If you love paranormal fantasy packed with action and romance, then Nicola C. Matthews’ The Red Fang

You have subscribed to alerts for Nicola C. Matthews.

You have been added to Nicola C. Matthews's favorite list.

You can also sign-up to receive email notifications whenever Nicola C. Matthews releases a new book.