Nikolaos Margioris was a contemporary experiential neo-pythagorean and neo-platonic metaphysical Master, founder of the Omakoios of Athens, Lamia and Trikala, and a Christocentric and Christocratic Mystic. Within 23 years (1970-1993), he wrote 189 philosophical, spiritual texts and practical guides and taught the Esoteric Truth in our country for 35 years.

In addition to his profound and exceptional written work, he left behind a vast and timeless-revelatory wealth of oral spiritual testimonies on the entire range of Occultism and Mysticism-Theosis for study and application.

He was born on the island of Samos on December 15, 1913 and spent some of his childhood there, in Alexandria of Egypt, and in India, but left his last breath in Athens on May 6, 1993.
The teaching of N. Margioris consists of the harmonious coexistence of the ancient Greek, Egyptian and Indian mysteries, along with the inner Christian tradition. Above all, however, it is filtered, revived and crowned by his profoundly esoteric and mystical realization, which contributes to the "treasury" of the spirit and to his personal Revelation, his own unprecedented experiential testimony of the Theogony, Cosmogony, Ontogony and Eschatology of Creation.

In 1976, he established for the first time in Athens the Omakoio of Athens in honor of Pythagoras and thus contributed to the revival of Pythagorean ideas.

In the autumn of 1990, he inaugurated the Omakoio of Lamia of his pupils Dimitris and Koula Tsaparas and in January of 1992, the Omakoio of Trikala of his pupil Ilias Katsiambas.
After his transmigration, his assistant Smaro Kosmaoglou took over the direction of the Omakoio of Athens. The instructors mentioned above -on their own or through their students- or even former members of Master Margioris founded other Omakoios in several parts of Greece that continue the work and philosophical legacy of Nikolaos A. Margioris.

His brilliant and multidimensional spiritual work is invaluable and an Esoteric GEM-CHAPTER of great value worldwide, coming from one of the Great spiritual children of modern Greece, who will undoubtedly remain memorable and be beneficial to the history of mankind for all eternity.
Information: www.omakoio.gr & email: omakoeio@gmail.com or omakoio@omakoio.gr 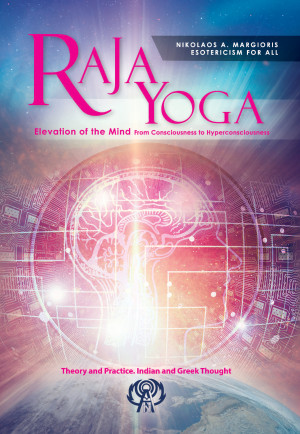 Raja Yoga Elevation Of The Mind From Consciousness To Hyperconsciousness: Theory And Practice. Indian And Greek Thought by Nikolaos Margioris
Price: $2.99 USD. Words: 73,620. Language: English. Published: September 22, 2019. Categories: Nonfiction » Philosophy » Buddhist
This book was first published in 1983. It is the highest level of my teachings in Esoteric Initiation. In essence, the subject being taught, is the ascendance of consciousness to places and worlds of another, unknown frequency...

You have subscribed to alerts for Nikolaos Margioris.

You have been added to Nikolaos Margioris's favorite list.

You can also sign-up to receive email notifications whenever Nikolaos Margioris releases a new book.