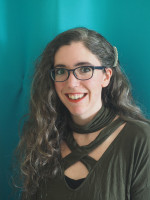 Amanda is a married, queer lady living with migraines and food allergy. She seeks to bring a queer sensibility and disability awareness to her writing, while keeping the focus on the joy of the story.

Where to find Amanda McNeil online

You have subscribed to Smashwords Alerts new release notifications for Amanda McNeil.

You have been added to Amanda McNeil's favorite list.

You can also sign-up to receive email notifications whenever Amanda McNeil releases a new book.