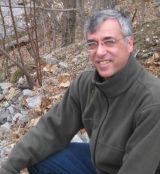 Patrick Farenga is a writer and education activist who worked closely with the late author and teacher John Holt and continues his work today as the president of HoltGWS LLC. After Holt died, Pat published Growing Without Schooling magazine (GWS) from 1985 until it stopped in 2001. GWS was the nation’s first periodical about learning without going to school, started by Holt in 1977. Unschooling is a word Holt preferred over homeschooling, since the learning Holt encouraged didn’t have to take place at home nor resemble school techniques and materials. The Farengas unschooled their daughters, now aged 27, 24, and 21.
Pat speaks as a homeschooling expert at education conferences around the world, as well as on commercial radio and television talk shows. His media appearances include The Today Show, Good Morning America, Voice of America, Geraldo, NPR’s Learning Matters, CNN’s Parenting Today, The Dr. Drew Pinsky Show, and Fox and Friends.
Pat co-authored Teach Your Own: The John Holt Book of Homeschooling (Perseus), The Beginner’s Guide to Homeschooling, many articles about homeschooling and democratic education and essays about unschooling in a number of publications, such as Un Mundo Por Aprender (University of Colombia, Bogota, 2011), and the entries about homeschooling for the International Encyclopedia of Education, 3rd Edition (Elsevier, 2010) and the online edition of Encyclopedia Britannica (2012). His most recent work includes reprinting Holt’s Escape From Children: The Needs and Rights of Children (HoltGWS, 2013) and a forthcoming original title, The Legacy of John Holt: A Man Who Genuinely Understood, Trusted, and Respected Children (HoltGWS, 2013).

Where to find Patrick Farenga online 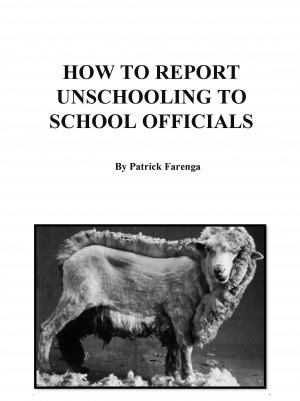 How to Report Unschooling to School Offficials by Patrick Farenga
Price: $2.99 USD. Words: 14,680. Language: English. Published: September 30, 2015 by HoltGWS LLC. Categories: Nonfiction » Education & Study Guides » Home schooling, Nonfiction » Education & Study Guides » Evaluation & assessment
If your state homeschooling regulations require you to submit a periodic evaluation you might need to explain your children’s growth and development in more depth to readers who do not understand unschooling (self-directed learning). This book shows you how to do this successfully. 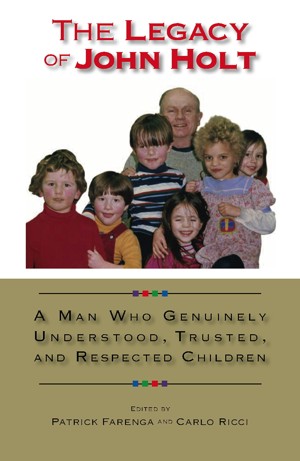 The Legacy of John Holt: A Man Who Genuinely Understood, Trusted, and Respected Children by Patrick Farenga
Price: $2.99 USD. Words: 56,680. Language: English. Published: February 21, 2014 by HoltGWS LLC. Categories: Nonfiction » Biography » Teachers & educators, Nonfiction » Education & Study Guides » Home schooling
Remembrances about the life and ideas of John Holt, a school reform advocate and best-selling author who became the secular founder of the homeschooling movement. Holt is a pivotal figure in American education whose ten books and work continue to inspire both schoolteachers and homeschoolers to help children learn in their own ways.

You have subscribed to alerts for Patrick Farenga.

You have been added to Patrick Farenga's favorite list.

You can also sign-up to receive email notifications whenever Patrick Farenga releases a new book.