Music is an important part of several of Paul Davenport’s readers, e.g. Rapping for Shelly, King of the Rappers or Kevin not Alone. Paul comes from a musical family. One of the happiest memories of his youth is the regular ‘jam sessions’ with his father, Paul on alto sax, his father on the piano. Paul enjoys a wide range of music styles including pop, rap, country, disco and rock and roll, including songs by German artists. After completing his postgraduate studies, he moved to Germany, where he’s been living with his wife and family ever since. The roots of his writing career go back to the stage plays he wrote for his English classes to perform. One of them, The Royal Choice, became his first publication, in 1996. Four years later, he wrote the first of his many school readers. A highlight in his writing career was when his story Crossroads to Love’ became a finalist in the Extensive Reading Foundation’s contest for reader of the year 2007. The second highlight came a year later, 2008, when another of his stories, Horror Trip on the Pecos River was named the winner of that same contest! Paul’s hobbies include reading, table tennis and fly fishing. He sometimes misses the trout fishing in northern Maine, where he grew up. He still has his alto sax and, from time to time, takes it out and plays a tune or two.

Where to find Paul Davenport online 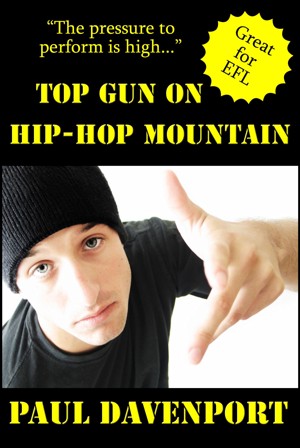 Top Gun On Hip-Hop Mountain by Paul Davenport
Price: $2.99 USD. Words: 16,160. Language: English. Published: November 10, 2012. Categories: Fiction » Young adult or teen » Romance, Fiction » Young adult or teen » Social Issues
What happens when an ordinary, 17-year-old white kid becomes a famous rapper? It’s a magic carpet ride. Ben is doing what comes naturally: performing live on stage. He loves it. And thanks to his talent and his agent’s connections, he gets to perform to ever larger audiences. Then comes a dream come true: a tour as the opening act for a famous rapper! But soon the dream turns into a nightmare!

You have subscribed to alerts for Paul Davenport.

You have been added to Paul Davenport's favorite list.

You can also sign-up to receive email notifications whenever Paul Davenport releases a new book.