Her screenplays (including What Happened to Tom and Exile) have placed in several competitions, including Moondance, Fade-In, GimmeCredit, WriteMovies, Scriptapalooza, and American Gem.

She has also written several nonfiction books: Just Think About It (Magenta); Sexist Shit that Pisses Me Off (Magenta); Critical Thinking: An Appeal to Reason (Routledge); Should Parents Be Licensed? Debating the Issues (Prometheus); What If? Collected Thought Experiments in Philosophy (Longman); Ethical Issues in Business: Inquiries, Cases, and Readings (Broadview).

She was a columnist for the Ethics and Emerging Technologies website for a year (her "TransGendered Courage” received 35,000 hits, making it #3 of the year, and her “Ethics without Philosophers” received 34,000 hits, making it #5 of the year), The Philosopher Magazine's online philosophy café for eight years, and Philosophy Now for two years. In addition, her short commentary pieces have also been published in Humanist in Canada, Links, Academic Exchange Quarterly, Inroads, Elenchus, South Australian Humanist Post, Forum, and The Humanist. Her longer pieces have appeared in Free Inquiry, The International Journal of Applied Philosophy, New Humanist, The New Zealand Rationalist and Humanist, Philosophy in the Contemporary World, Sexuality & Culture: an interdisciplinary journal. And she's had a list published at McSweeney's (“Why Feminist Manuscripts Aren’t Getting Published Today”). She now blogs (sporadically) at pegtittle.com and hellyeahimafeminist.com.

She has an M.A. in Philosophy, a B.Ed., and a B.A. in Literature, and has received over twenty Arts Council grants.

Where to find Peg Tittle online

Shit that Pisses Me Off by Peg Tittle 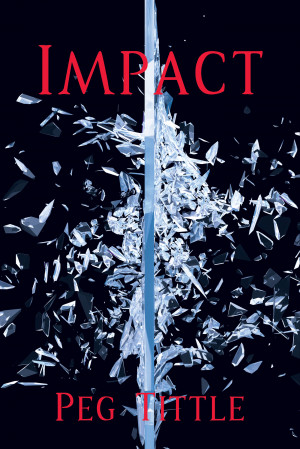 Impact by Peg Tittle
Price: $2.99 USD. (Free!) Words: 22,750. Language: English. Published: May 3, 2020 by Magenta. Categories: Fiction » Women's fiction » Feminist, Fiction » Themes & motifs » Psychological
Impact presents an extended confrontation between a sexual assault victim and her assailants, as part of an imagined slightly revised court process, in order to understand why they did what they did and, on that basis, to make a recommendation to the court regarding sentence. It does not go … as expected. 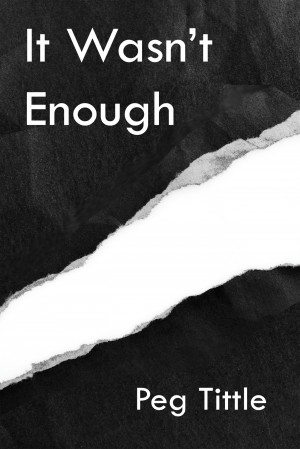 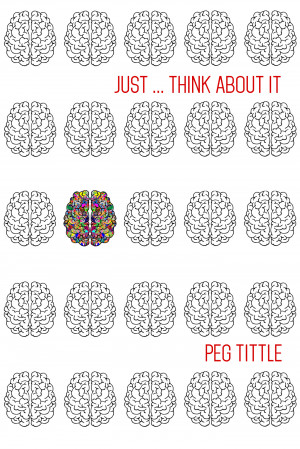 Just Think About It by Peg Tittle
Price: $3.99 USD. (Free!) Words: 70,010. Language: English. Published: April 4, 2018 by Magenta. Categories: Nonfiction » Social Science » Social psychology, Nonfiction » Philosophy » Social
A collection of think pieces on a variety of topics: the environment (who owns the water, climate change as entertainment, … ), business (the limits of advertising, business in denial, …), individual rights and social issues (making certain words illegal, slutwalks, …), ethics (should parents need to be licensed, what's wrong with selling our organs, ...), education (the failure of …), and so on. 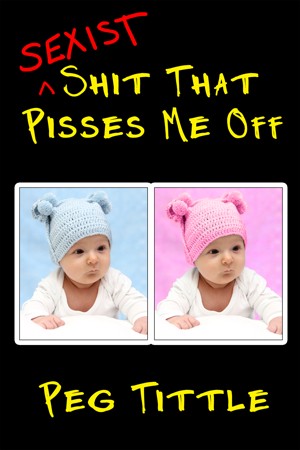 The title says it all. A collection of 110 exposes and analyses of everyday sexist shit that pisses me off. 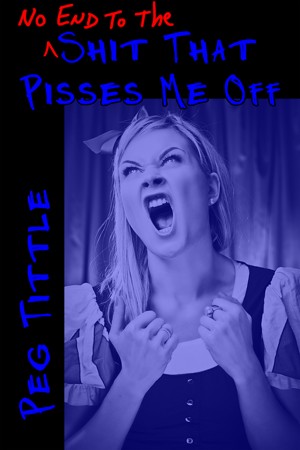 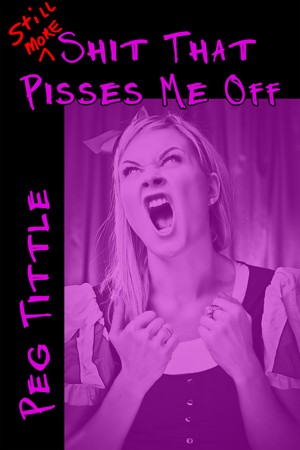 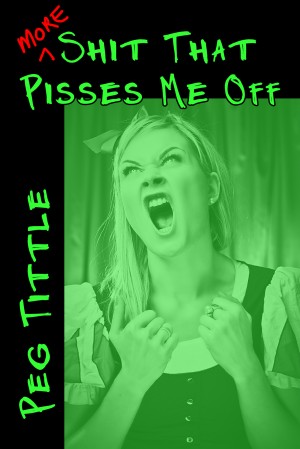 More Shit that Pisses Me Off by Peg Tittle
Series: Shit that Pisses Me Off, Book 2. Price: $1.99 USD. (Free!) Words: 14,710. Language: English. Published: April 30, 2012 by Magenta. Categories: Nonfiction » Social Science » Gender studies, Nonfiction » Philosophy » Social
Why do men spit (and women don’t)? What’s the real problem with cellphones? What’s wrong with wedding leave? Do you remember Grade Ten History? Why isn’t being a soldier more like being a mother? What did God really promise? And let’s talk about sex… 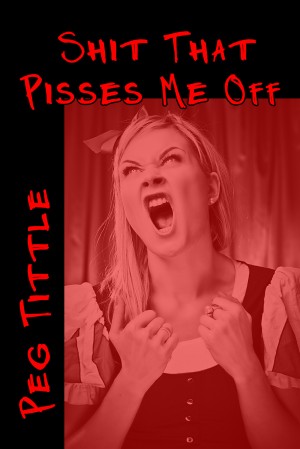 Should you need a license in order to become a parent? What’s wrong with calling people Ms. and Mr.? Why is casual day at the office insulting? Why should you take down the flag? Is women’s fiction really women’s fiction? Should we have professional jurors? Why shouldn’t athletes take performance-enhancing drugs? Why should you boycott marriage? And let’s talk about the weather report…

You have subscribed to alerts for Peg Tittle.

You have been added to Peg Tittle's favorite list.

You can also sign-up to receive email notifications whenever Peg Tittle releases a new book.