Edgar Struble is a true music visionary and a much sought-after music director of television and film. He’s scored some of the industry’s most successful productions, including The American Music Awards and The Academy of Country Music Awards, and has recently produced a feature film, "Mickey Matson and the Copperhead Conspiracy."

From 1976 to 1991, Edgar toured as conductor, arranger, instrumentalist, and vocalist with Kenny Rogers, contributing his talents to sell-out performances that broke even Elvis’ attendance records, and to recordings that went multi-platinum. As Rogers’ music director, Edgar arranged for and conducted the NBC Orchestra and Rogers’ Summer Pops Concerts at the helm of the Atlanta Symphony, and was responsible for the musical content of Rogers’ many network television specials.

During his tenure with Kenny, he arranged for many other performers including Al Hirt, Dottie West, The Oak Ridge Boys, Lynda Carter, Leon Russell, and Ray Charles, and worked extensively with Dolly Parton, who called him “one of the best musical directors and instrumentalists I have worked with.” He continues in that capacity today, arranging the opening medley of the 2009 Academy of Country Music Awards for Brooks and Dunn, Taylor Swift, Rascal Flatts, Sugarland, and Carrie Underwood.

Edgar’s composing and directing talents have contributed to the success of many highly rated television and film projects including the CBS special, “A Day In the Life of Country Music,” and the CBS miniseries, “Rio Diablo” and “Gambler V.” He was responsible for the musical content of NBC’s highest-rated variety special, “Kenny, Dolly and Willie: Something Inside So Strong.” He also excelled as composer, music supervisor, and music editor for the CBS movie “Big Dreams and Broken Hearts: The Dottie West Story,” starring Michele Lee.

In 1996, Edgar began a working relationship with Dick Clark Productions that continues to the present. As musical director for The Nashville Network’s flagship program, “Prime Time Country,” Edgar assembled and directed the house band, wrote the theme music, and performed on-camera. “This was one of the most exciting and rewarding milestones in my career,” says Edgar. “Collaborating with so many talented people to create a daily live variety show was exhilarating, and an experience I’ll never forget.”

Since 1999, Edgar has been based in Los Angeles, where he’s scored music for the successful “Your Big Break” and “Greed” series, and TV specials, “Challenge of the Child Geniuses,” “It’s Your Chance of a Lifetime,” and “The First Family’s Holiday Gift to America” for FOX, as well as several documentary specials for TLC, A&E, and The History Channel. His association with Dick Clark Productions has led to Edgar’s current position as music director and composer for its annual, prime time network specials, The Academy of Country Music Awards and The American Music Awards.

Edgar has produced recordings for Al Hirt, Michele Lee, Bobby Hatfield (of the Righteous Brothers), and for the comedian Gallagher’s Showtime TV Specials.

Where to find Edgar Struble online 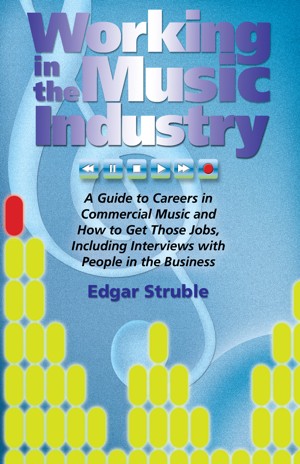 Working In The Music Industry by Edgar Struble
Price: $4.99 USD. Words: 40,800. Language: English. Published: May 12, 2010. Categories: Nonfiction » Music » Music business, Nonfiction » Career Guides » Entertainment
Working in the Music Industry is a collection of straightforward advice on preparing for and entering careers in the music business. Author Edgar Struble draws upon his extensive experience as a nationally known music director in presenting the myriad opportunities available in the field. In addition, throughout the book there are interviews with folks who are successfully working in the business.

You have subscribed to alerts for Edgar Struble.

You have been added to Edgar Struble's favorite list.

You can also sign-up to receive email notifications whenever Edgar Struble releases a new book.