William Peterson grew up in a small rural town in Upper Michigan, where his wife began saving all of his business cards. He is multi-talented, but bores easily. He has previously been a flight instructor in both airplanes and helicopters and a corporate pilot for 18 years. He was a log homebuilder, a taxidermist, owned and operated a trucking company, and the list goes on.

Bill has written a couple of magazine articles prior to writing about his Vietnam tour in 67-68. After fifteen years of passionate writing, the author released his book, "MISSIONS OF FIRE AND MERCY~UNTIL DEATH DO US PART". This award-winning author has won the Silver Medal Award for memoirs in the 2011 Military Writer's Society of America Awards Program.

During his tour in Vietnam as a Huey helicopter crew chief/gunner, he was shot down more than once, wounded and had many close calls with death. Regardless, Peterson gives full credit to what he called "White Robe 6", his moniker for God. Deeply indebted to his higher power, Peterson writes that "White Robe 6 DOES answer when men call upon him. Not as a voice audible on radio circuits, but in the inmost recesses of the soul." A must read!!

Where to find William Peterson online 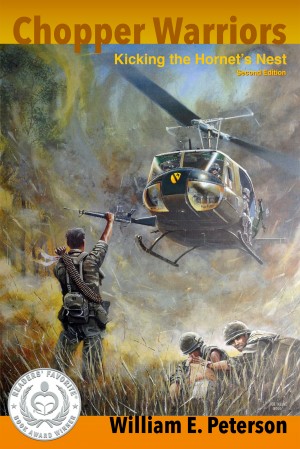 Chopper Warriors - Kicking The Hornet's Nest Second Edition by William Peterson
Price: $2.99 USD. Words: 41,240. Language: English. Published: January 28, 2014. Categories: Nonfiction » History » War, Nonfiction » History » War
Bill Peterson's book, Missions Of Fire And Mercy, is filled with thrilling and technically accurate day-to-day descriptions of his tour and experiences as a crew chief in Viet Nam. he is a gifted storyteller who writes no "fluff copy". his attention to detail is outstanding, and in the end he is able to make a great page turning story, guaranteed to be a historic account from the warrior's eyes. 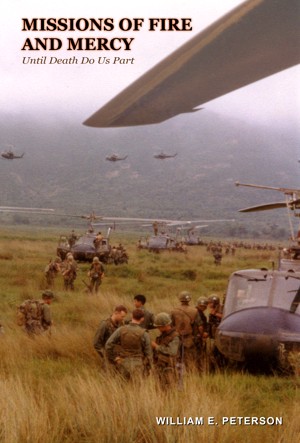 Missions Of Fire And Mercy - Until Death Do Us Part by William Peterson
Price: $2.99 USD. Words: 41,250. Language: English. Published: May 16, 2013. Categories: Nonfiction » History » War, Nonfiction » Religion & Spirituality » Biblical Reference / General
william peterson was awarded the silver medal for memoirs in the 2011 military writer's society of america, for his book “missions of fire and mercy”. the author served as a huey crew chief/door gunner with charlie 227th assault helicopter battalion, first air cavalry. come along for the ride of your life while we fly nap of the earth receiving enemy fire. you're hit by shrapnel from ak47 fire.

You have subscribed to Smashwords Alerts new release notifications for William Peterson.

You have been added to William Peterson's favorite list.

You can also sign-up to receive email notifications whenever William Peterson releases a new book.