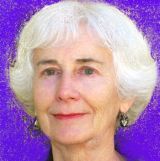 I now live in Los Angeles -- married for more than 45 years, 2 adult sons, a son-in-law, and daughter-in-law. I became interested in graphic novels after reading several. I took four classes at Santa Monica College on the concept and techniques for graphic novels and sequential art.

Originally from a Montana farm, I am one of nine children. I began drawing before age 4. Mom would cut open used envelopes for me to draw on. Dad gave me the big, soft-lead, square carpenter's pencils to use. When in high school, I got an oil painting set for Christmas and fell in love with color. Selling my two cows (4-H projects) put me through my first year of university.

I graduated Seattle University, Fine Art degree. Besides working at a print shop, department store displays, small graphic art projects, drawing cow spots for registration forms, I had a small business of house design and architectural drafting for building contractors for 25 years. I also painted (acrylic on canvas) exhibiting in art shows and galleries for 20 years in Olympia Washington and Palm Springs..

Check my website for more life details in About and Bio. The website also contains my blog.

When did you first start writing?
As a serious creative endeavor, more than three years ago. The creative work for most of my life has been in painting and sculpture.
What motivated you to become an indie author?
Last year, the Southern California Society of Children's Books/Writers & Illustrators gave "SQUAWK!, A Story in Fowl Language" the 2012 Sue Alexander Award for the best unpublished manuscript. My manuscript is the graphic art form (comic book style). An agent and editor showed immediate interest and discussed revisions which I made. Within a couple of months, both dropped my book from consideration.

In following months, I contacted a number of other agents and editors. None were interested. Finally, I asked myself: What do you want to do with your graphic art stories? Research brought me to Smashwords and Mark Coker's business model. I decided this is for me.
Read more of this interview.

Where to find Penelope Merrell online

You have subscribed to alerts for Penelope Merrell.

You have been added to Penelope Merrell's favorite list.

You can also sign-up to receive email notifications whenever Penelope Merrell releases a new book.