Phillip Drown writes with a fierce and unbridled perception of life and its characters, enlivening each paragraph with vivid reality and imagination.

As a child, he dreamed up ideas for stories, filling numerous sketchbooks over the years, full of ideas for new tales (alongside poems, titles, song lyrics, sketches and doodles, scenes for films and comedy sketches).

His published debut, The Reputation of Booya Carthy, was released in 2015. Described as "entertaining, gripping and almost unbearably poignant . . .", the novel received universal praise, and continues to gather new readers as it travels by word of mouth across the world.

A barrowful of tales have followed since, some of which can be found on the Short Stories page of the author's website, www.phillipdrown.com. One of Phillip's stories, The Weight of Nothing, was included in Kerry Barner's Best of The Short Story: Volume 2. Another, Madame Colti, was published in a collective anthology titled Stories From Anywhere. Towards the end of summer 2019, he finished writing his (as-yet-untitled) second novel.

Describe your desk
My desk is pretty small and basic pine affair, stained and lovely. I think that it used to belong to one of my brothers, but it's been with me for over ten years, now. I have never thought of changing it. We fit each other well.
Where did you grow up, and how did this influence your writing?
Growing up in the south east of England, as a child I was always fascinated with Spike Milligan, Michael Rosen and Roald Dahl. I would make up my own stories and poems - usually in the nonsense-style of my three heroes - and attempted to add illustrations to them. Spike looked around our house once upon a time. Apparently I walked around the house with him and his wife reciting his poems. I have only vague recollections of this old man who said not a word. That style, comedic and entertaining, still influences my writing now.
My heroes weren't footballers and musicians: it was people who wrote poems who kept me constantly amused.
Read more of this interview.

Where to find Phillip Drown online 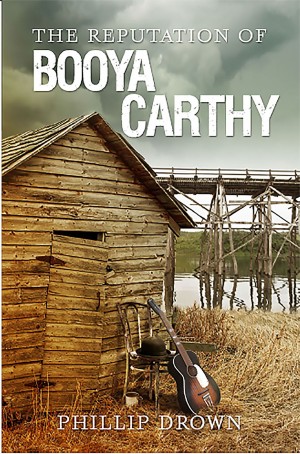 The Reputation of Booya Carthy by Phillip Drown
You set the price! Words: 150,060. Language: English. Published: July 31, 2015. Categories: Fiction » Thriller & suspense » General
All that Calvin 'Booya' Carthy wants to do is play the blues. Immersing himself into the cut-throat local scene, his popularity spreads beyond the county borders. The Great Depression has hit America. Violent racial hatred remains rife. As danger follows Calvin to those he loves, he must decide how much he would sacrifice for his reputation. Where is there to hide when everyone knows your name?

You have subscribed to alerts for Phillip Drown.

You have been added to Phillip Drown's favorite list.

You can also sign-up to receive email notifications whenever Phillip Drown releases a new book.