P.H.T. Bennet began exploring the world of the dreams when he was a child and never bothered to stop when he grew up. He had the good luck to have two daughters, Juliette and Paola, who not only served as the inspirations for DeeDee and Kiva, but also shared their dreams and helped him turn their family dreamwork sessions into this book. His lucky streak grew when he married his lovely wife, Mim, who tolerates his turning on a light in the middle of the night to write down ever-crazier dreams and talking about them in the morning as long as he lets her sleep in first.

Though flying dreams are his favorite, he also loves the challenge of rewinding, replaying, and revising nightmares until they have much more interesting (and less brutal) endings, the thrill of breathing and swimming at high speeds underwater, the surprise of creating new works of art, the dangers in meeting, battling, and learning from his Shadow as it changes forms, the delight of returning to Paris, where he lived for 5 years, for delicious meals, and the peacefulness he gets from dream visits with his father, who passed away four years ago. He can’t wait to hear what your favorite dreams are and what dream skills you hope the book will develop. You can either share them with him at phtbennet@raisingstones.com or with everybody reading the book at http://raisingsleepingstones.tumblr.com.

What do you read for pleasure?
Wow, that's hard because I read a LOT and I read everyday. I read a lot of middle-grade and YA fiction because I got hooked very young by books like "From the Crazy, Mixed-Up Files of Miss Basil E Frankenweiler", the "Encyclopedia Brown" series, the "John Carter of Mars" books by Edgar Rice Boroughs and pretty much everything Frank Herbert ever wrote because I was so captivated by the world he created for "Dune."
I read between 10-12 books a month now. I'm about to finish "Goliath," the 3rd book in the "Leviathan" series by Scott Westerfeld and am fascinated by the way he is exploring the battle between those who innovate through genetics and those who believe that we should continue to innovate through machines. Because I was so hooked by the fairy-tale twisting Kelly Thompson did in her novel "Storykiller," I just read her other, equally amazing book, "The Girl Who Would be King." My wife and I really enjoyed Gail Carriger's steampunk "Soulless" series, and because there are no more, I'm now on the 2nd book of her "Finishing School" series. What else? Let's see, have read all the Percy Jackson books and love how Rick Riordan has not only made mythology cool again, but has found really clever ways to dance between Greek, Roman, and Egyptian myths. I wish Eoin Colfer would keep going with the Artemis Fowl series, partially because I love the arc Artemis is on, but mostly because I want to have Holly and Butler around as long as possible. There's Brendon Mull's "Fablehaven" and "Beyonders" series, Nancy Farmer's captivating "Sea of Trolls" books, anything written by Barbara Kingsolver and Louise Erdrich, and my annual rereading of a Dickens novel- usually David Copperfield -and Lois Lowry's "The Giver" books, the last of which I'm delaying finishing because I don't want them to end.
What is your e-reading device of choice?
I use my iPhone and iPad throughout the day, whenever I have a free moment. It's a lot more satisfying than checking my email! I gave my Nook to my wife, and she is just burning through books on it. I don't think the device matters- what counts is the stories we choose to access on them.
Read more of this interview.

Where to find P.H.T. Bennet online

Raising Sleeping Stones Trailer
Will the Stone sisters learn the Dreamkeeping skills they need to survive? 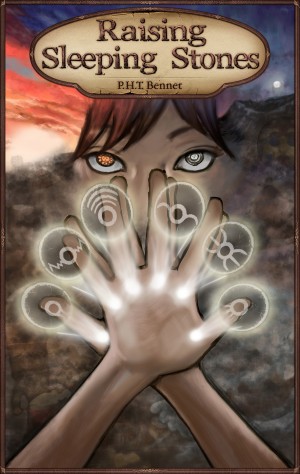 Raising Sleeping Stones by P.H.T. Bennet
Price: $4.99 USD. Words: 121,610. Language: English. Published: November 26, 2014. Categories: Fiction » Fantasy » Contemporary
***Winner of a 2013 Newbury Comics Award!***  When sisters Kiva and DeeDee Stone discover a mysterious plot that threatens them and everything they care about, they have to take a crash course in the ancient art of DreamKeeping to survive. Can they become strong enough to fight the enemies that draw nearer each day? The answer lies somewhere in the broken history of the Valley of Dreams.

You have subscribed to alerts for P.H.T. Bennet.

You have been added to P.H.T. Bennet's favorite list.

You can also sign-up to receive email notifications whenever P.H.T. Bennet releases a new book.