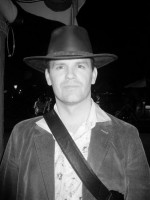 Nickolas J. Spradlin is an American writer, who divides his living time between Florida, Texas and New York while dedicating himself to reading, writing and researching. He is the author of the historical Roman fantasy SHADOWS Beer-Sheva to Negev.
Mr. Spradlin is an attorney by training. He was born in Englewood, Colorado and grew up in Arizona and Kansas. After graduating from Manhattan Christian College with a degree in Religious studies he completed his Juris Doctorate at Michigan State University.
His travels include Spain, Morocco, Portugal, UK, Italy, Israel, Egypt, Saudi Arabia, Haiti, Mexico and Canada.
His fascination with history begin with his humanitarian travels to Haiti and Mexico. While helping build a School, hospital and homes abroad he became intrigued with the culture, religions and politics of other countries and especially their history.
While in Law School he traveled to Europe to learn European Union Law. While living in Spain he spent as much time studying the countries rich history he did law. When his studies were over and before he took the Florida, Texas and New York bar he traveled to Portugal the UK and then to Morocco.
The common them of Roman influence was everywhere. Eventually a burning interest in Roman history combined with that of the religious history of ancient Judea caused the idea for the first book in the Shadow Series.
The Shadow series includes everything he has an interest in. Religious history, military history, historical fiction, clandestine activities, philosophy, poetry, and yes...romance.
His fascination with military history, weapons, armor, martial arts and leadership stem greatly from his grandfather's influence. He was a soldier in Edson's raiders who fight in most brutal combat in US history in Guadalcanal. His religious fever comes from his mother and father who are people of faith. His interest in philosophy and psychology come from his brother who is a brilliant thinker and practicing psychologist specializing in the difficult field of DBT. His love for poetry and romance come from the heart. All these interests are reflected in his novels creating a rich environment and well developed characters.
More biographical information is found on his website WWW.PrimeEmergence.com 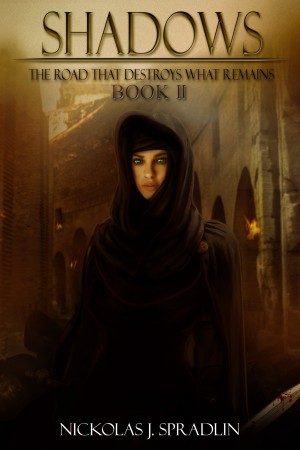 Shadows The Road That Destroys What Remains Book II by Nickolas J. Spradlin
Price: $1.99 USD. Words: 93,320. Language: English. Published: June 20, 2016. Categories: Fiction » Fantasy » Paranormal, Fiction » Alternative history
This series tells the story of two families reaching for high station in First Century Judea. In their quest for power and influence, they are bitterly opposed by the most determined resistance fighters, who seek the ouster of the Roman Empire from Judaea. One family, the Nildarpas, are Romans. The second family, a group of mercenaries known as the Shadows, become a Roman special operations unit. 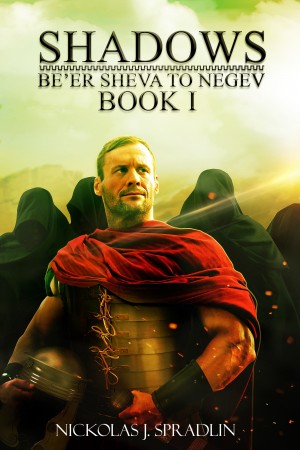 Shadows Be'er Sheva To Negev Book I by Nickolas J. Spradlin
Price: $0.99 USD. Words: 53,760. Language: English. Published: March 23, 2016. Categories: Fiction » Fantasy » Historical
This series tells the story of two families reaching for high station in First Century Judea. In their quest for power and influence, they are bitterly opposed by the most determined resistance fighters, who seek the ouster of the Roman Empire from Judaea. It is told from the perspective of the Romans and their Shadow Warriors as well as the resistance fighters who seek the end of Roman rule.

You have subscribed to alerts for Nickolas J. Spradlin.

You have been added to Nickolas J. Spradlin's favorite list.

You can also sign-up to receive email notifications whenever Nickolas J. Spradlin releases a new book.