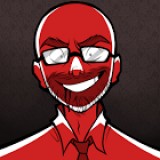 Author R. A. Brewster is from West Virginia, where he lives with his wife and a slew of domesticated beasts. A lover of the works of H. P. Lovecraft and Clive Barker, he tries to pay homage to the ones who helped give him that spark to tell stories of his own. His first series, Dead Letters, draws inspiration from folklore and those strange word of mouth tales everyone seems to know a version of. It is a blend of horror and fantasy set in a world filled with ghost dreams, troll DNA and abominations of nature.

Take a peak down this rabbit hole but be careful not to fall in, it is a long way down.

Asking yourself questions and then answering them is the first sign of insanity, some say. Would you consider yourself insane?
That is an excellent question if I do say so myself. Ray Bradbury summed up how I feel about my own sanity best when he said, "Insanity is relative. It depends on who has who locked in what cage." I've been in a few cages, some nicer than others. I guess if you are on the outside looking in, then yeah sane isn't really on the table anymore.
If you had to pick three writers that influenced you the most, who would they be?
Oh, that is a tough one. I would have to say, Clive Barker is one. There was nothing off the table for him. In Books of Blood he let his talent run wild and free. There was a beauty to the ugly in his descriptions. Sexual and monstrous and alluring, most of the time all three at once. His "The Age of Desire" really struck me, as did "The Hellbound Heart." Barker showed me to not censor myself for what others would think but to be true to the story I was telling.

Next up, and I'm going to cheat just a bit with a combo, is H.P.Lovecraft and Steven King. Lovecraft's world and mythos not only created cosmic horror but infected writers that came after him like a memetic virus. While stories of his like "Re-Animator" and "The Music Of Erich Zann" are some of my favorites to this day, King's take on cosmic horror really sunk its teeth into me. From the outer dark nightmare that was Pennywise, to the twisted Crimson King, otherworldly horror is not in short supply in his work and I love every page of it. His ability to show the struggles of mortals against these things, to make us care for them and weep at sacrifices they make against the incredible odds stacked against them, is second to none. I can only hope to give as much life to my characters as King does to his.

Last but not least would be Richard Laymon. I really jive with his blend of sex and violence, his books are always a roller-coaster. Splatterpunk with sleaze and under all the blood and fluids, a heart. I still remember how his "The Traveling Vampire Show" kept me glued to the pages. Not for the horror of it but to see if the broken, yet sharp Slim would realize our protagonist's growing love for her. Was there sex and blood and vampires and awful things alluded to, sure was. But that relationship is what kept me reading to the last word.
Read more of this interview.

Where to find R.A. Brewster online

You have subscribed to Smashwords Alerts new release notifications for R.A. Brewster.

You have been added to R.A. Brewster's favorite list.

You can also sign-up to receive email notifications whenever R.A. Brewster releases a new book.