When R.A. grew up, "everybody knew" girls didn't enjoy sex outside of marriage, because they wanted only to please their husbands and reproduce the species. While boys snuck looks at PLAYBOY centerfolds, girls read Harlequin romances. At the end, the man and woman kissed.

In the 1970s feminists denounced "pornography" as violence against women.

Almost everybody -- men and women -- in practice defined "pornography" as explicit descriptions or depictions of sex.

Only men admitted to enjoying it.

Women didn't -- either didn't enjoy it or didn't admit to enjoying explicit descriptions or depictions of sex.

However, some years ago, women began writing stories of . . . drumroll, please! . . . explicit descriptions of sex.

Calling it "erotica" rather than "pornography."

That makes it okay.

Because erotica novels tell stories of romantic relationships which just happen to include plenty of explicit depictions of hot sex.

And women -- from college to boomers R.A.'s age -- love it! Just look at the incredible success of 50 Shades of Gray!

Unimaginable back in the Stone Age of R.A.'s extreme youth.

Millions of women read stories of love relationships, including lots of great sex.

That is, Christian meets Ana. She falls for him. Why not? He's rich and "beautiful." He wants her to be his submissive. They spend much of the first book arguing about terms.

Yet, at the same time, Christian starts adapting to Ana. He sleeps with her in the same bed -- just sleeps -- as an example. He's never slept beside a woman before. Had some kind of sex with them in a bed, yes -- then left to actually be alone when asleep.

They have vanilla sex, another first for him.

There're lots of hints about how emotionally wounded he is, which causes him to work obsessively (Although, to be truthful, this has presented in the book is a lot of hooey. True billionaire corporate leaders could not squeeze in all the socializing Christian indulges in, whether with submissives, true girlfriends, or even wives. But it's also true, nobody cares about lack of credibility on this issue.), driving him to be the ultra success he is at such a young age.

It wasn't until after I finished writing the series that I read the second and third books of the 50 Shades series and discovered they didn't go quite in the direction I predicted.

So, I thought about how a young woman might hook up with a guy who wants her to play as though she's his little girl daughter.

So far, the Daddy's Day series, while selling well, aren't competing with 50 Shades.

While writing the Daddy's Day books, I fell in love with all Summer's family and friends. I couldn't wait to discover the secrets behind Grandma's powers -- which Spring is in on, though Summer isn't. And I know who Autumn's going to fall in love with, and wanted to learn what he's really been doing overseas for the past few years.

But now I worry that if somebody finds me through the Daddy's Day series because they enjoy age play, they won't enjoy the more ordinary contemporary new adult romances, paranormal romances, and other related stories.

And people who read and enjoy those books, and then try out the Daddy's Day series, may be offended by the age play content.

So it's a quandary I'm puzzling over.
Read more of this interview. 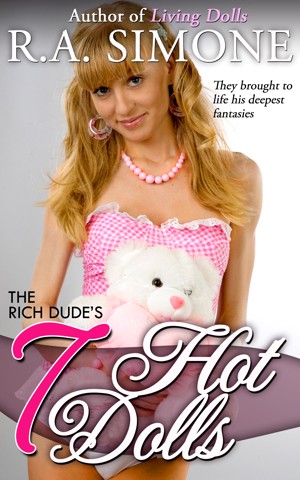 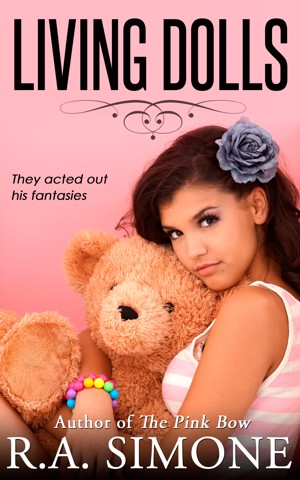 Living Dolls by R.A. Simone
Price: $2.99 USD. Words: 13,050. Language: English. Published: December 18, 2013 by Wendy. Categories: Fiction » Erotica » Men's Erotica, Fiction » Erotica » Contemporary
David takes after his father in many ways. He founded a successful business and is obsessed with beautiful women, particularly those acting younger than their years. When David's father introduces David to his "friend" Melissa, David doesn't know what to think, when he finds Melissa dressed like a very young woman and twerking. And when Melissa finds Calamansi for David, he can't resist.

You have subscribed to alerts for R.A. Simone.

You have been added to R.A. Simone's favorite list.

You can also sign-up to receive email notifications whenever R.A. Simone releases a new book.