Ray Kurzweil is one of the world’s leading inventors, thinkers, and futurists, with a thirty-year track record of accurate predictions. Called “the restless genius” by The Wall Street Journal and “the ultimate thinking machine” by Forbes magazine, he was selected as one of the top entrepreneurs by Inc. magazine.

Among Ray’s many honors, he received a Grammy Award for outstanding achievements in music technology; he is the recipient of the National Medal of Technology, was inducted into the National Inventors Hall of Fame, holds twenty-one honorary Doctorates, and honors from three U.S. presidents.

Ray has written five national best-selling books, including New York Times best sellers The Singularity Is Near (2005) and How To Create A Mind (2012). He is Co-Founder and Chancellor of Singularity University and a Director of Engineering at Google heading up a team developing machine intelligence and natural language understanding. 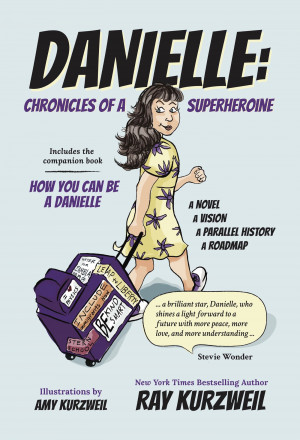 Danielle: Chronicles of a Superheroine by Ray Kurzweil
Price: $4.99 USD. Words: 127,290. Language: English. Published: April 23, 2019 by WordFire Press. Categories: Nonfiction » Engineering, trades, & technology » General
Noted futurist Ray Kurzweil has created a novel, and an unforgettable character—Danielle—to convey his optimistic vision for our future. Danielle is a prodigy who sets out to change the world and through innovation and spunky attitude, succeeds in unexpected ways. This complete eBook includes 23 thought-provoking essays on how readers can bring about these changes.

You have subscribed to alerts for Ray Kurzweil.

You have been added to Ray Kurzweil's favorite list.

You can also sign-up to receive email notifications whenever Ray Kurzweil releases a new book.