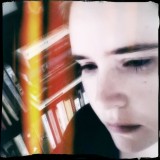 Robin was born in Arizona. She spent her childhood exploring the wild foothills of the Sonoran Desert on horseback, often getting into scrapes on her sturdy mare, Blue. Always an avid reader, she won her first short-story writing contest at the age of 9 and had her first work published in a children's magazine when she was 10.

Since then, Robin has never stopped writing. While attending Northern Arizona University pursing degrees in English and traditional printmaking, her short stories appeared in a number of magazines, including Scribindi and the Edgar Review. Robin's thesis project for her BFA involved the creation of a hand bound book and a collection of short stories, each modeled after a fairy tale and accompanied by an original serigraph print.

Since her graduation with honors in 2006, Robin has continued to write. Her work often explores themes of strong connection between humans and animals and the rediscovery of lost magic. Her collection of six high fantasy novellas, beginning with Tessili Academy, is available from Brown Wing Press. She is currently hard at work on a more massive epic saga. The first book, The Burdened Boy, is scheduled for publication in 2020.

Robin lives in Iowa City with her husband, her Australian Shepherd, and their small herd of horses. She also writes novels about horsemanship and the southwest under the pen name Stefani Wilder.

Where to find Robin Stephen online

You have subscribed to alerts for Robin Stephen.

You have been added to Robin Stephen's favorite list.

You can also sign-up to receive email notifications whenever Robin Stephen releases a new book.