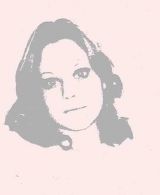 While growing up, Rebecca Lochlann began envisioning an epic story, a new kind of myth, one built upon the foundation of the Greek classics and continuing through the centuries right up into the present and future.

This has become her life's work, though she didn't exactly intend it to be that way when she started.

The Child of the Erinyes series is historical mythic fantasy, “Loads of testosterone, slaughter, and crazy magic” (with a love story, of course.)

Even though the story is fiction-fantasy, it still took about fifteen years to research the Bronze Age segments of the series, and encompassed rare historical documents, mythology, archaeology, ancient religions, and volcanology.

The Year-god's Daughter is her debut novel: Book One of The Child of the Erinyes series. In the spring of 2013 it was utilized as a study guide in an American university, and later was named a B.R.A.G. Medallion honoree, recognizing outstanding fiction. Book Two, The Thinara King, (A 2013 Next Generation Indie Book Awards finalist,) continues the saga. Book Three, In the Moon of Asterion, wraps up the Bronze Age segment of the series and leads into Book Four, The Moon Casts a Spell, Book Five, The Sixth Labyrinth, and Book Six, Falcon Blue. The last two books of the series are in rewrites.

Her biggest writing influences might be Patricia A. McKillip, Anita Diamant, Peter S. Beagle, Anne Rice, and Yevgeny Zamyatin, to name a few.

Rebecca has always believed that certain rare individuals, either blessed or tortured, voluntarily or involuntarily, are woven by fate or the Immortals into the labyrinth of time, and that deities sometimes speak to us through dreams and visions, gently prompting us to tell their lost stories. Who knows? It could make a difference.

For bibliographies, details into the history, characters, research, the arc of the series, and much more information, visit Rebecca’s website: http://rebeccalochlann.com

Sign up to receive announcements for new releases: http://eepurl.com/ws_jf

Where to find Rebecca Lochlann online

You have subscribed to alerts for Rebecca Lochlann.

You have been added to Rebecca Lochlann's favorite list.

You can also sign-up to receive email notifications whenever Rebecca Lochlann releases a new book.