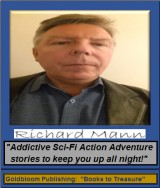 Richard Mann grew up in being an avid reader of books, even from an early age he loved the literary giants Tolkien, Michael Moorcock, Frank Herbert and Douglas Adams and read all their books. (If you like these kind of books you will love Richards books). He started writing at 16 and started a book called tales from Mellyms Tarc, with a character called Gluloidic. The dream of becoming a writer faded until a few years ago when he started writing again. During his twenties he studied business studies and accountancy. During this time he also studied Shaolin and Wing Chun Kung Fu and even starting a school with a friend. He has worked as an accountant, Software developer in the City of London for banks and insurance companies, and is now an author.

Dominion First Blood is his first book. His mercurial book is action packed, fast paced, and guaranteed to keep the reader turning pages to the end. This wholly original book falls within the Sci-Fi Action adventure genre with elements of thriller and horror. It combines incredible action, hair-raising scares and big laughs. It will shock the reader into thinking about his own place in the world. Warning: This book may keep the reader up all night!

After marrying his wife Brenda he visited her family in the Philippines and opened his eyes to a whole different world. Richard is a fellow Member of the Association of Accounting Technicians, Member of the Institute of Analysts and Programmers and a Member of the British Computer Society. He is 56, has two teenage boys and lives in Berkshire.

The best way to keep up with his latest news is to sign up for his newsletter.

Where to find Richard Mann online 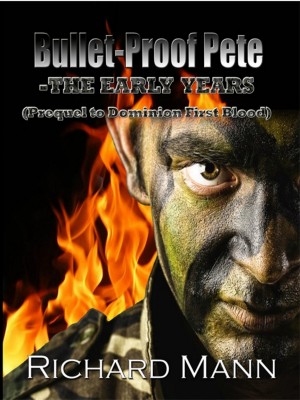 Bullet-Proof Pete -The Early Years (Prequel to Dominion First Blood) by Richard Mann
Price: Free! Words: 17,640. Language: English. Published: June 23, 2016. Categories: Fiction » Science fiction » Adventure
This book is a prequel to the Sci-Fi action adventure blockbuster - DOMINION First Blood. It follows the early days of SAS Super-Hero Bullet-Proof Pete and his side kick Vinnie The Terminator - Getting Badged after a gruelling selection, their adventures and near death in the deserts of Yemen, their rebellious confrontations with superiors and their days in MI6 tracking terrorists. Peter has a v

You have subscribed to alerts for Richard Mann.

You have been added to Richard Mann's favorite list.

You can also sign-up to receive email notifications whenever Richard Mann releases a new book.