Photo by Ken Odor — Rev. Dr. Robert Bluford Jr. and Del. Chris Peace stand in the doorway of the structure which marks the site of the historic Polegreen Church, destroyed in the Civil War.

The Rev. Robert Bluford Jr. has been a B-24 fighter pilot in World War II, preacher, historian, preservationist, a Presbyterian pastor and campus ministry director in the Southeast, and the Virginia Press Association’s Virginian of the Year for 2011. He is also the founder and president of the Historic Polegreen Church Foundation and helped to save land around the historic Polegreen Church in Hanover County, Virginia, and was the 2004 recipient of the annual award presented by the Council of America’s First Freedom.

The retired Presbyterian minister's passions have included the Fan Free Clinic, which he helped found in 1968, and Civil War site preservation. At 92, he is still an activist, working for better treatment of Virginia's Native Americans and establishing a Civil War memorial being among his top pursuits. His Civil War dream is to plant a tree for every American killed during the war along a 100-plus-mile stretch of US 15.

The author in detail: In his younger days, Bob, a Richmond, Virginia, native, interrupted his studies for the ministry at Hampden-Sydney College in May 1942 to volunteer for the U.S. Army Air Force. He served as a B-24 bomber pilot and squadron leader in the 8th Air Force during World War II, then returned to Hampden-Sydney and graduated in 1947 as valedictorian.

He was active in the civil rights movement on campuses in the 1960s and in peaceful protests of United States military involvement in Southeast Asia. In 1971, Bob was a co-founder of the Fan Free Medical Clinic in Richmond. He served on the board of directors of Planned Parenthood in Richmond. Over the last 30 years, he has served as minister or associate at Presbyterian churches in Richmond and at 86 was still active as a pastor and preacher.

During his ministry he served as a leader and volunteer in projects to preserve numerous historic sites in Virginia, including two — the Historic Polegreen Church Foundation in Hanover County and the Laurel Historic District in Henrico — that were placed on the Register of Historic Places of the U.S. Department of the Interior. He currently is director of the Douglas Southall Freeman Branch of the Association for the Preservation of Virginia Antiquities.

Since 1990, he also has been active with the United Indians of Virginia’s effort to recover nearly 2,000 skeletal remains of their ancestors from the Smithsonian Institute. He was elected to the United Indians’ board of directors in 1995 and is the only non-Indian to be recognized as a board member.

Since 1989, he has devoted time and energy to the Historic Polegreen Church Foundation, the church whose early history is told as an engrossing you-are-there story in this book by the foundation’s founder. Bob Bluford was recognized “for his determined preservation of the Polegreen meeting house site” as the Virginia recipient of the 2004 First Freedom Award bestowed by the Council for America’s First Freedom. 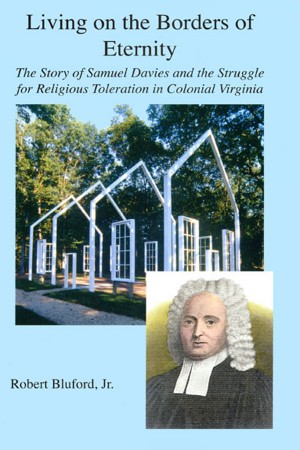 Living on the Borders of Eternity - The Story of Samuel Davies and the Struggle for Religious Toleration in Colonial Virginia by Robert Bluford Jr.
Price: $9.99 USD. Words: 178,730. Language: English. Published: April 12, 2011 by Fideli Publishing, Inc.. Categories: Nonfiction » Biography » Religious biography, Nonfiction » Biography » Historical biography
"Living on the borders of eternity" were the words Samuel Davies used to describe his feelings of being a physically sick man who didn't have long to live. Davies was advised by his physician to give up hope of continuing his ministry in Virginia. He refused to give up at 23, and for eleven years made a remarkable impression on multitudes, leaving a legacy unmatched in his time, and by few since.

You have subscribed to alerts for Robert Bluford Jr..

You have been added to Robert Bluford Jr.'s favorite list.

You can also sign-up to receive email notifications whenever Robert Bluford Jr. releases a new book.