Roger MacBride Allen was born in Bridgeport, Connecticut on September 26, 1957. He graduated Boston University in 1979 with a degree in journalism, and published his first novel in 1984. From that time to this, every work of science fiction that he has completed has been published. He has written over twenty novels to date, (three of which were New York Times bestsellers), two extremely obscure technical manuals, and a modest number of short stories. He is also the co-author (with his father, Thomas B. Allen) of Mr. Lincoln’s High-Tech War, published by National Geographic.
In 1994, he married Eleanore Fox, an officer in the U. S. Foreign Service. In March 1995, they moved to Brasilia, Brazil, where Eleanore worked at the embassy. In August, 1997, Eleanore’s next assignment took them back to the United States. Their son, Matthew Thomas Allen, was born November 12, 1998. A posting to Leipzig, Germany, made that the birthplace of their second son, James Maury Allen, born April 27, 2004.
In August 2010, the family moved once again, for a two to three year posting in Mexico City, Mexico. When in the United States, they live in Takoma Park, Maryland, just north of Washington, D. C.
Visit his website at rogermacbrideallen.com 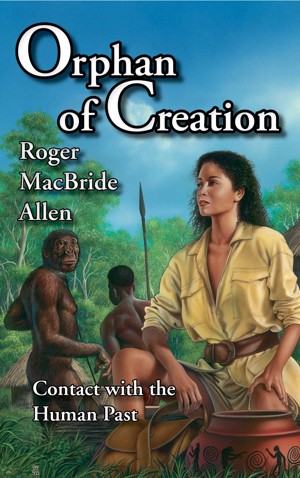 Orphan of Creation: Contact with the Human Past by Roger MacBride Allen
Price: $7.99 USD. Words: 121,010. Language: English. Published: December 16, 2010 by FoxAcre Press. Categories: Fiction » Science fiction » General, Fiction » Science fiction » Adventure
An anthropologist stumbles across a stunning secret that will put the very definition of humanity suddenly in doubt. Are the bones buried there the remains of humans, or apes -- or something else? The answer will turn her life, and the world, upsidedown. 'Anyone who likes good hard science in their fiction will have to go a long way to find a better-done book.' --Locus

You have subscribed to alerts for Roger MacBride Allen.

You have been added to Roger MacBride Allen's favorite list.

You can also sign-up to receive email notifications whenever Roger MacBride Allen releases a new book.