Ron Veronda is an educator, author, speaker and emissary of social change. He has over four decades of experience as a teacher, school principal, college lecturer and educational innovator. He began teaching at age 20 and has taught nearly every grade level.

After seeing schools change drastically for the worse during his first twenty years as an educator, Ron moved beyond his regular duties to look for solutions. In 1993, he co-founded The Children's Consulting Center in San Mateo, California, a think tank and action center for children, parents and educators. Two years later he created an alternative school within a public school system, tailored for troubled teens. Choices in Life School modeled a different, more effective way of educating youth.

For the last fifteen years, Ron has intently taught graduate-level university classes, conducted workshops and participated in conferences in the United States and abroad. He is the author of A Renaissance in Education: Creating a Wiser, Healthier and Less Violent World (2015, No More Turning Away: A Revolution in Education, Solutions for a Violent World (2001) and contributing author to Educating for Humanity: Rethinking the Purposes of Education, by Mike Seymour (Paradigm Publishers, 2004).

He lives in the San Francisco Bay Area.

Where did you grow up and how did it influence your writing?
I grew up in San Leandro, California, next to the San Francisco Bay. We lived a block from the water, just south of the Oakland Airport. My father worked at The Naval Air Station in Alameda. Airplanes coming and going were an exciting part of my childhood. The bay and the inlets and fields surrounding it were my playground. It was a great neighborhood with it's own elementary school. We were lower middle class, I guess, but it was a safe and nurturing place to grow up. We could play on the streets—leave home in the morning and come home at night. No one worried.
Did you grow up wanting to be a writer?
I never wanted to be a writer. Don't get me wrong, I had and still have a great imagination, but I became a writer out of necessity—for others. While working as a teacher and school principal, I was shocked at what the world was becoming. The situation in the communities around me became dark. Slowly over the decades, I saw drugs come into schools. I saw gangs appear. I watched homelessness become a reality. And then I had to deal with school violence and suicides. That gets your attention. I had to stand up and do something. I couldn't write, per se, but I knew I could learn. I was terrified of public speaking, but I had things to say. My voice became a voice for them.
Read more of this interview.

Where to find Ronald Veronda online 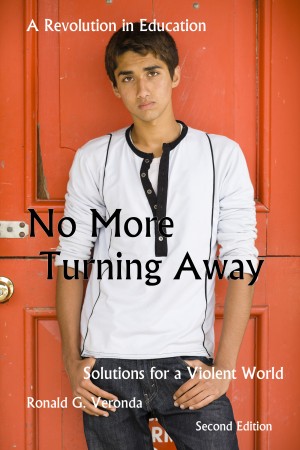 No More Turning Away, A Revolution In Education, Solutions For a Violent World, Second Edition by Ronald Veronda
Price: $2.99 USD. Words: 55,720. Language: English. Published: June 28, 2015. Categories: Nonfiction » Education & Study Guides » Philosophy & social aspects
They say if you look for something hard enough, you just might find it. “No More Turning Away” tells the story of a small group of educators who—after decades of watching their schools and communities become overcome by alienation, drugs, homelessness and violence—decided to do something about it. What they learned was shocking in it’s effectiveness and scope. 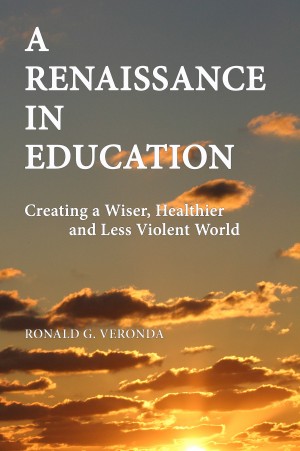 A Renaissance in Education: Creating a Wiser, Healthier and Less Violent World by Ronald Veronda
Price: $1.99 USD. Words: 61,920. Language: English. Published: May 1, 2015. Categories: Nonfiction » Education & Study Guides » Philosophy & social aspects
“A Renaissance in Education” illuminates an emerging worldwide rebirth and introduces our society to a proven, more effective educational design that not only changes our schools but in turn transforms our communities. With “true” education schools create the impetus for positive social change instead of serving as an end-point for social disintegration.

You have subscribed to alerts for Ronald Veronda.

You have been added to Ronald Veronda's favorite list.

You can also sign-up to receive email notifications whenever Ronald Veronda releases a new book.